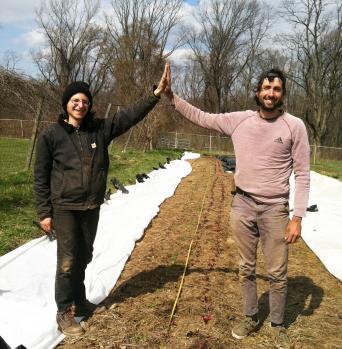 She’s No Stranger to Digging

Before deciding to become a farmer, I was an archaeologist. I worked at various sites in Greece and Italy — including Pompeii! — but I primarily worked on the island of Crete at a Bronze Age town known as Gournia. I originally moved to Philadelphia to pursue my PhD in archaeology at the University of Pennsylvania.

My plan, after finishing the PhD, was to use my knowledge of ancient food systems as a platform to advocate for modern food and environmental justice. But after my first semester at Penn, I withdrew. I realized that if I wanted to make meaningful changes in the food system, I had to work directly in local communities.

I had already enjoyed working on a farm in Kansas before moving to Philly, so I decided to pursue farming as a new career and avenue for creating social and cultural change. Getting this job at the Mort Brooks Farm feels like the culmination of the career shift I set in motion just over a year ago.

I’m grateful to be farming in Northwest Philly, not least of all because it brings me closer to my spiritual community at St. Vincent’s Catholic Church in Germantown. I look forward to finding more communities over the course of the season.

One thing you should know about me: I identify as a trans woman, and prefer feminine (she/her) gender pronouns.

From Vermont to Germantown

I became interested in farming as an Environmental Studies major at the University of Vermont. After working at UVM’s student-run farm and The Farm Between in Jeffersonville, VT, I continued working on various organic vegetable farms across the Northeast, always for a full season, if not two. While letting go of a desire for more continuity in my relationships with farms and people was challenging, I am grateful to have been exposed to different management practices and gotten to know different communities.

More recently I worked at an educationally oriented overnight leadership program for teenagers in Newport, PA, in the Susquehanna Valley, called Longacre, where I managed a 1/2 acre vegetable garden for camp meals and outdoor learning. I also worked at Tait Farm near State College (a Weavers Way vendor!). There I became more adept in and enthusiastic about no-till growing practices, which I feel excited to share with the rest of the Weavers Way Farms crew!

I continue to be drawn towards farming as a way to relate positively to myelf and the people and space around me. I look forward to bumping into you out at the farm.