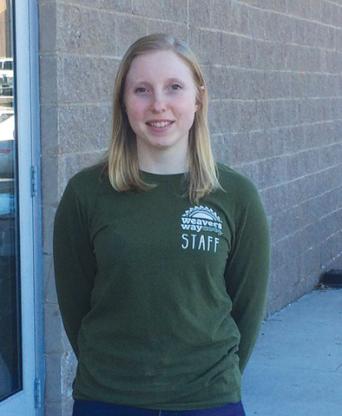 Since when: She was hired for Ambler’s produce department in September, 2017, about a month before the store opened. She applied for the assistant grocery manager position last fall and was promoted in October.

Education: She earned a bachelor’s degree in environmental geography in 2012 from Millersville University in Millersville, Lancaster County.

Previous job: She was hired as a part-time member of the produce team at Creekside Co-op in Elkins Park just before that store opened in October, 2012, and was later promoted to assistant produce manager and then produce manager. When she was thinking about leaving Creekside, she reached out to Kathryn Worley, the former Ambler store manager, who was Creekside’s general manager for a few months. Kathryn, in turn, put her in touch with Ambler Produce Manager Erik Fagerstrom.

Future plans: She’d like to move out west at some point, for a change of scene.

Thoughts on the job: “[Grocery] feels a little more behind the scenes, because I spend a lot of time in the dairy cooler, or [in] backstock, whereas in produce, I feel I’m much more in the forefront of the store. It’s just a different dynamic, I guess, but [there’s] still lots of work to do.”

Thoughts on Co-ops: “I feel like people are closer knit. There isn’t that corporate mentality hovering over you; there’s a little more humanity in the overall systems and management. If someone gets sick, you’re not going to get penalized for calling out.”