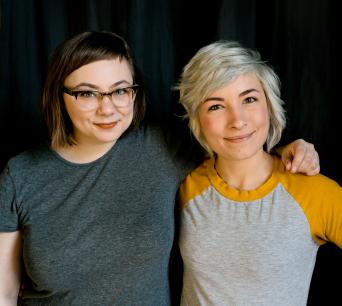 Shannon Roche and Meagan Benz, left and right above, bake cookies and bars, and they'll also be glad to make your wedding cake.

If ever there was a match made in baking heaven, then Meagan Benz and Shannon Roche are it. These entrepreneurial women, who opened their wholesale Crust Vegan Bakery three years ago, share parallel stories. They’ve both been vegans for a decade. Shannon grew up in rural Tennessee. She made the decision to drop out of grad school, where she was working on her Ph.D. in marine biochemistry, and opened a vegan bakery for an organic food market, Roots, in Maryland. At the same time, she also created her own vegan food blog, which served as a digital profile. She had no real professional baking experience but experimented on her own in the confines of her home kitchen. Meagan grew up in Greensboro, NC, where she attended school studying chemistry and art and graduated with a design degree. Meagan was also fond of baking vegan treats for her friends out of her home.

Then they both ended up in Philadelphia, where they credit the close-knit Philadelphia vegan community for their eventual partnership. Mutual friends had encouraged the two to meet; after Shannon learned that Meagan had quit her stint at another vegan institution, they met for coffee to discuss their dream of opening a bakery. They hit it off, and soon after, Crust Vegan Bakery was born.

For the first year, both women worked day jobs and baked at night at a commissary kitchen in East Falls. In their second year, they decided to leave their day jobs, Shannon quitting first, followed by Meagan. These days, they have their own wholesale kitchen in Manayunk with three full-time employees in addition to themselves, plus a part-timer.

Crust is known for its cookies, brownies, specialty birthday cakes and other sweet treats. Meagan is the artistic one and does all the cake design; Shannon manages sales, while also doing some of the baking. They use only natural ingredients, which means no artificial colors or preservatives, and focus on sustainable ingredients such as fair-trade cocoa and vanilla extract. In the future, they would like to move toward using local fresh fruit in some of their recipes to help support local farms and economy.

Their products are carried in dozens of local coffee shops and other retail outlets and can be ordered from their website at www.crustveganbakery.com. They’re also excited to announce a major collaboration with Grindcore House, an all-vegan coffee shop that’s opening a second location in West Philadelphia this summer.

While the word “vegan” may scare some people off, the reality is, no one can tell the difference biting into a Crust Vegan Bakery cookie. At Joe Coffee in Center City, Crust Bakery’s cookies aren’t even labeled as vegan, although a sign does note, “Ask about our vegan options.” Shannon and Meagan have found that word of mouth and social media are their best marketing tools. In addition to fans of delicious baked goods, folks with dairy or egg allergies are return customers.

Meagan and Shannon also couldn’t speak more highly of the Philly vegan community. When their new oven was six weeks late for arrival earlier this year, other vegan businesses including the Tasty, Miss Rachel’s Pantry, Dottie’s Donuts, and Blackbird Pizzeria all reached out to offer their services and support. Some people even offered their own home kitchens for use.

Crust is proudly women-owned-and-operated. “It is a very supportive environment. It feels good to go to work every day,” Shannon said. They support other women-owned companies, and as the business grows, they also hope to support their employees’ own passion projects. “We aspire to be an inspiration to others and provide a sense of ownership for our employees that encourages the employees to grow as owners,” Shannon said.