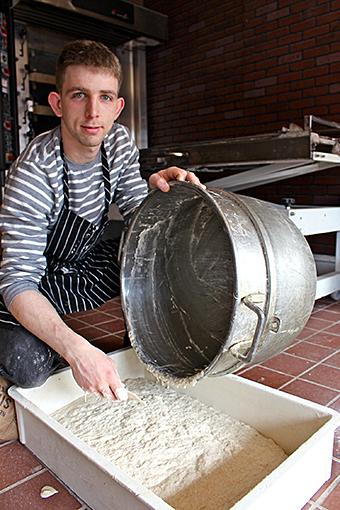 While it may only be a year and a half since we started carrying Merzbacher's of Germantown's (formerly known as Philly Bread) Philly Muffin at the Co-op, many of us can hardly remember the bakery shelves without it. If you haven’t tried one of Pete Merzbacher’s signature Philly Muffins yet, you still have time to sample what Pete thinks Philadelphia will soon be famous for. Having witnessed his determination and eaten his bread, I believe him.

Pete moved to Philadelphia on a bit of a whim, and with a passion for cooking, but not a ton of experience. He walked into one of Philly’s best restaurants, Talula’s Garden on Washington Square, and asked for a job. They obliged with an opportunity most Philly cooks would die for. It was at Talula’s that he learned to bake bread, and started experimenting on his own.

He quickly fell in love with sourdough starter, and developed something resembling a traditional English muffin on steroids. Friends asked for it time and again, so Pete started a bread “CSA,” with weekly deliveries.

In the early days of his business, he would educate himself with trips to bread bakeries in New York City, saying he couldn’t find anything that compared in Philadelphia. He was baking at a pizza shop in West Philly and had been volunteering at Weavers Way Farms. We started talking about selling his bread at the Co-op.

Merzbacher's was a hit from Day 1. It was a solo operation: After baking all night, Pete would load bread onto his bike for nearby stops, or for Weavers Way, his farthest customer, his bread would ride with him on the Regional Rail, in a Zipcar, and finally, after funding the much needed purchase, in the back of his Toyota. But in what was supposed to be a temporary fix, he moved his bakery to Olney, on a stretch of N. 5th Street he came to realize was a veritable Bakers Row. Dominican, Colombian and Italian baked goods line the windows of neighboring shops.

He now employs seven people — three bakers and a bakery supervisor, a part-time cleaner and two delivery drivers. Two of his bakers live in the neighborhood and have been making bread for 20 years. “Tony can turn out a thousand hand-rolled loaves a day if I need him to,” Pete comments with an obviously grateful tone. Another baker is a Harvard alum who found Pete, looking to learn artisan baking techniques.

At the heart of Merzbacher's is the grain. He has been buying his flour from local growers and millers, Castle Valley Milling and Farmer Grown, but it’s always been Pete's goal to mill his own. His dream mill has been ordered, so the Philly Muffin of 2015 will be made with flour milled in-house.

Ultimately, Pete wants Merzbacher's to contribute to the neighborhood that has helped him grow. He wants to sell retail, and having his own flour mill will allow him to work on more niche products, as he’ll have the opportunity use a wider variety of grains.

I’m hoping his recent experiments with doughnuts, made from his signature sourdough starter, find their way to the shelves at Weavers Way.