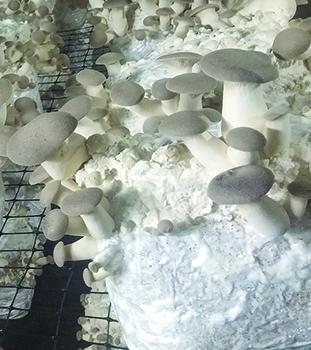 Hidden from the human eye, vast underground networks of interconnecting organisms thrive. These cities of mushrooms — “mycopolitans” — are held together by mycelia, the threads that link fungi together. Mycelia have a human counterpart in Tyler Case, Brian Versek and Dan Howling, who have formed a community of toadstool lovers, connecting Philadelphians through the mushrooms they grow and sell in their mushroom-growing enterprise, Mycopolitan.

Tyler’s connection to this unique food source formed early on. “From a young age, I've loved foraging and cooking,” he said. “I saw mushrooms in my edible plant field guide, but never had the nerve to cook them up. In high school, I found the nerve. The first wild mushroom I ate was a ‘chicken of the woods.’ . . . I grew up in Cherry Hill, right by the Mall. Not the best foraging right there, but once I could drive, I would go all over South Jersey.” Tyler began finding other kinds of mushrooms, such as black trumpets and chanterelles. He was hooked, and dreamed of one day growing his very own chicken of the woods.

That opportunity came in 2011, when he began seriously exploring the possibility of starting a mushroom farm and guest-lecturing on mushrooms at Saul High School. He introduced mushrooms to his friend Brian, with whom he had worked for years at his day job at a methadone clinic in West Philadelphia. “We went hunting for wild mushrooms,” Tyler said, “and spent time practicing lab techniques together.” Soon after, Tyler and Brian met Dan Howling at a talk by world-renowned mycologist Paul Stamets. “Dan was looking for a job mushroom farming at the time and caught wind of what we were starting,” Tyler said. “We myco-geeked out hard. We started growing in October 2014.”

But before they could grow, they had to research, envision, design and construct. “Building a functioning indoor farm, on a limited budget, was something there was little information on,” Tyler said. It was eight months before they grew their first fungus in their “cave” at D and Erie, where they rent space from Common Market, the nonprofit food distribution network.

“We've been tweaking things and making improvements over the past year-and-a-half, but the way our farm looks now is pretty close to what it looked like on paper two years ago,” Tyler said. “We built a lab and two hoop-houses similar to those you would find on an outdoor farm, only they're in a basement. One houses bags of mycelium, munching away at sawdust substrate. The other is well-lit, with lots of fresh air and humidity. This grow room is where the mycelium turns the energy from that substrate into delicious mushrooms.”

“We typically get two harvests within a month, at which point we move blocks to local farms and gardens to produce more mushrooms before eventually breaking down into humus.”

Tyler’s knowledge of mushroom farming is matched by his deep respect for “these amazing life forms.” “Generally speaking, all mushrooms contain chitin, a type of dietary fiber which has been shown to lower cholesterol and support healthy gut flora. All mushrooms contain immune-supporting sugars in their cell walls. Nutritionally, most mushrooms also contain good amounts of protein, potassium and various minerals. Mushrooms have been found to have beneficial effects on the brain, cardiovascular system, athletic performance, cancer treatment, and, of course, spiritual well-being. The list goes on. It is shocking how many biologically active compounds are produced by mycelium.”

Customers at Weavers Way have experienced those benefits firsthand through Mycopolitan’s farm-share program, which provides a seasonally rotating supply of fresh mushrooms — nameko, shiitake, trumpet, and other kinds of winter-friendly mushrooms. “Winter is a time when most farms in our area are shut down,” said Tyler. “Therefore mushrooms are one of the few crops one can find fresh and local this time of year. We love winter because cold weather is perfect for growing nameko mushrooms.”

Tyler and his co-farmers share a strong commitment to cultivating a deep appreciation of mushrooms among Philadelphians everywhere. “We do a couple workshops a year teaching DIY mushroom growing,” Tyler said. “We do a fun foraging expedition followed by a wild-mushroom feast in the fall, and we occasionally run tours of our farm for students. I have been teaching at Saul High School since 2012.” Saul received a National Farm to School Network "Seed Change" grant with which to expand its classroom mushroom-growing facility.

“It's clear that fungi are essential to the success of our species on this planet, and that there are countless discoveries to be made — yet fungi are barely mentioned in most schools,” Tyler said.

“Mushrooms are inherently interesting — they're weird, they’re beautiful, they can grow big and grow bright, yet they often go unnoticed. Once you begin noticing them, they have a way of revealing themselves in interesting ways. Not every kid will become as obsessed as I did, but by learning about these life forms, you at the very least learn the lesson that an unimaginable network exists right under your feet.”