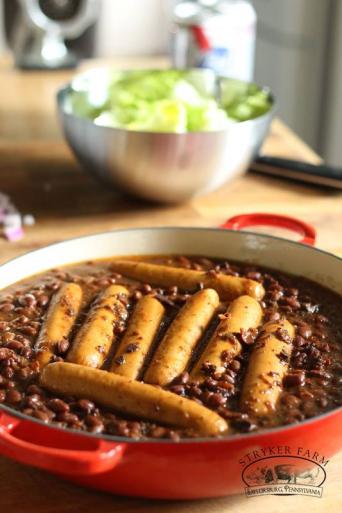 Stryker Farms provides Weavers Way stores with pork from heritage-breed pigs, as well as goat meat, all from animals raised to the highest standards and treated humanely.

Nolan Thevenet grew up in the mountainous countryside in Saylorsburg, PA. After attending a local college, he transferred to Drexel to get a taste of Philadelphia. Realizing he missed the outdoors, he returned to his mother’s 47 Monroe County acres to become a farmer.

In his early 20s and little knowledge about farming, Nolan looked at the wooded property and decided to purchase a few pigs and goats. Pigs are traditionally foraging animals, and the ones he raises — Tamworth and Yorkshire —  are particularly well suited for it. A big pink pig from a conventional farm would not do well at Stryker Farm, which is what Thevenet decided to call the place, after his grandmother. Starting with six pigs and three goats, Nolan turned to the Internet, other educational resources, and trial and error to learn how to raise livestock naturally.

The 200 pigs he now raises are on eight acres of the property, eating acorns and other forage for 90 percent of the day, coming into the large open barn to eat additional feed. In the summer the pigs tear into watermelons, and when we were there in October, we watched them wander through a barn scattered with what was left of two truckloads of pumpkins. His goats forage another eight acres of the property. Nolan also works with Weyerbacher Brewers to make use of the spent grains from their beer production. It’s the old-school barter — he provides a pig for the Easton, Pa., brewery’s company picnic. The grains provide the pigs added protein, which he also supplements with non-GMO pig feed, containing soy and minerals.

Stryker Farms runs a “farrow to finish” farm, meaning Nolan raises both breeding stock and butcher hogs. Heritage pigs raised primarily on forage are slower to grow, but develop sweeter meat and more flavorful fat and marbling. As conventionally raised pigs are fed a high-grain diet to force them to put on weight more quickly, their meat is fattier but less flavorful. Much of the meat is then actually unacceptable for consumption, and is therefore wasted. The pigs at Stryker are raised to about eight months old and 250-300 pounds, when they are full weight for the slaughterhouse, and Nolan does something with every bit of the hog.

We currently carry Stryker Farm’s pulled pork, a variety of sausages, pork chops, pork belly, spare ribs, ground pork and even a little ground goat meat. Availability may differ between stores, so check in with our meat department on what’s available and what you would like to see on the shelves.