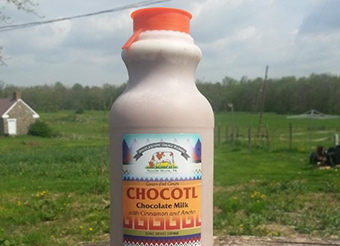 Wholesome Dairy Farms near Douglassville, PA, has a herd of about 45 grass-fed cows who produce all of Mark’s milk, yogurt and kefir. He uses a rotational pasture system so each patch has time to renew itself by the time the cows complete the circle. He believes firmly in grass, and supplements in the winter with hay or alfalfa, never soy or corn. Cows evolved eating grasses, and while they can consume soy and corn, the starch ferments quickly into volatile fatty acids and makes their stomach content extremely acidic. Soy is also high in isoflavonoids, which act as a plant-based estrogen that’s a problem for those wanting to avoid ingesting hormones.

What a cow eats also affects the fat in their milk. Grass-fed cattle produce higher levels of conjugated linoleic acid. This kind of fat, referred to as CLA, is a “good fat.” It converts fat tissue to lean muscle, and has been shown to be anti-cancer when consumed in small quantities. It also stabilizes blood sugar, helping to prevent diabetes, and improves bone density and calcium absorption.

Most Americans drink milk from conventionally raised cows, which are fed corn and soy because it increases the volume of milk they produce. So they are not getting the high levels of CLA — upwards of five times the amount in conventional cow’s milk — available in milk from grass-fed cows.

Another benefit of grass-fed cows is that they are actually cleaner, and as a veterinarian, Mark would frequently recommend that sick cows be put out to pasture and allowed to graze they are meant to do. Grazing keeps cows from developing foot diseases and lameness that can happen on concrete. The natural dirt of the pasture, as opposed to the waste that builds up in concentrated animal feed lots, where many conventionally raised cows live, gives them better reproductive and udder health, and cleaner milk.

While Wholesome Dairy Farms focuses on whole raw milk, Mark’s other products are required by law to be made from pasteurized milk. He uses a low-heat method for yogurt and kefir, and flavors them with honey, agave and vanilla beans.