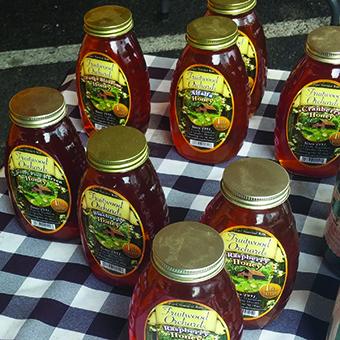 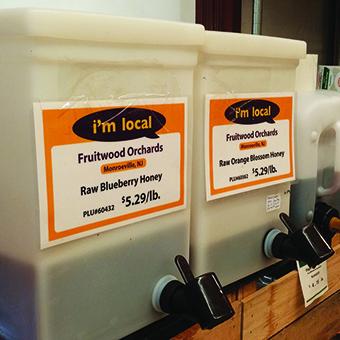 With agriculture dominated by mega-producers, it’s reassuring to find a favorite product packaged and distributed by a local family business. One example: Fruitwood Orchards in South Jersey, which provides honey, both bottled and bulk, to Weavers Way.

The story starts in 1951, when Gloria and Everett Wright planted 110 acres of fruit orchards in Gloucester County. To pollinate their crops, they made the then-novel decision to set up beehives on their farm in addition to relying on wild bees. Other farmers, seeing their success, soon asked the Wrights to do the same for them.

In short order, the Wrights’ pollination business overtook their fruit business. As a side benefit, they sold honey they extracted from their hives at a table by the side of the road.

It’s still a family business; Dennis Wright, son of the original owners, manages the company along with his son, Kevin.

“Fruitwood Orchards honey is definitely the best-selling honey in the store,” said Stephanie Kane, Weavers Way’s local purchasing coordinator. “We chose it as our standard honey years ago.”

To produce the orange-blossom honey, the bees commute. Each year, Fruitwood transports millions of them to Florida to pollinate orange groves.

How do you move millions of bees up and down the East Coast? As quickly as possible, and in one shot.

At night, when the bees are less active, employees load more than 4,300 colonies onto flatbed trucks and place netting over them. They begin their journey in the dark, but once day breaks, the bees naturally want to get to work. To inhibit their flying off to new pastures (literally), the trucks keep moving until they reach the bees’ winter home in the Sunshine State.

The bees return between April and July to South Jersey, where they pollinate blueberries, cranberries and other crops. All the honey is extracted and bottled in New Jersey. The Wrights also still grow fruit, selling at the farm and several seasonal farmers’ markets and running a U-pick operation. They also have a specialty crop — wine grapes for home and small commercial winemakers.

How is Fruitwood honey different from commercial mega-brands? Fruitwood doesn’t filter its honey, so it contains pollen, bits of beeswax, propolis, air bubbles and even the occasional bee wing. Nor is it pasteurized, as is often done to extend shelf life, but at the expense of enzymes, vitamins and other nutrients.

To process the honey, Fruitwood Orchards workers put frames of honeycomb into a centrifugal extractor, which spins the liquid honey to the outside edge of the collection container. It’s piped off and stored in 55-gallon drums before being packaged for sale. Since honey crystallizes in the drums, it has to be heated gently to get it to the bottling line — but never to a higher temperature than might occur naturally in the hive.

Fruitwood does have one thing in common with the big guys: They have been hit by colony collapse disorder, which has decimated honeybee populations nationwide for the last decade. Last year was the first time they had the problem, Dennis Wright said, but they lost 75-85 percent of their hives.

The consensus among scientists is that new pesticides that came on the market a decade ago probably play a role. In particular, they point to imidasloprid, the most widely used agricultural insecticide in the world, chemically related to nicotine. Even a sub-lethal amount in the hive makes bees more vulnerable to viruses and pests and, among other undesirable outcomes, adversely affects their memory, interfering with their natural homing abilities. In effect, they can’t find their way back home.

Wright reports that, this season, they are back up to 95 percent of capacity, thanks to new hives they made from existing healthy ones. “Everything has looked as good as it ever has,” he said.

While Fruitwood’s honey is raw and unadulterated, it cannot strictly be called “organic.” As Wright explains, use of pesticides and fertilizer on crops is so ubiquitous in the United States that it is difficult to find any agricultural area that is totally pristine. Fruitwood tries to minimize the bees’ exposure by moving them out of areas where sprays are being used. And the Wrights do treat their hives chemically to control mites, because there currently is no better alternative.

When you dip your spoon into that glowing amber ooze, you know you are in for a treat. But did you know that honey is also nutritious? Honey is quickly absorbed into the bloodstream, giving a quick energy boost, but raw honey also contains enzymes, pollen, minerals and vitamins. Honey has antibacterial properties and has been used in many medical applications over the years, such as storing skin grafts.

Honey is also known as a natural allergy remedy. You need to consume honey produced by a local beekeeper and work up to several teaspoons a day. First consult with your doctor. And never feed honey to babies under a year old. Their developing immune systems are not yet ready to handle a benign strain of honey botulism that doesn’t bother adults.

Cooking with honey? Heating it to high temperatures, as occurs in baking and even hot tea, can destroy many of honey’s benefits, according to honey aficionados. So stick to dipping and drizzling and you’ll be fine.

— Laura Young, for the Shuttle