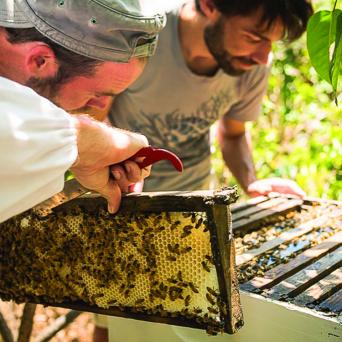 Main Line natives Ryan Williamson and Kevin O’Connor were more or less forced to return to their property on the Big Island of Hawaii two years ago to continue their hive product enterprise after several years of struggling to get their Delaware Valley bees to make enough honey to sell. But deep breaths: So far, everyone’s doing fine, especially the bees.

Ryan and Kevin, both 40, grew up in Bryn Mawr and Narberth, respectively.

They first went to Hawaii in 2000 as part of a permaculture-certification program Ryan was taking. “It was there that I first came into contact with honeybees, and it was just naturally an extension of gardening for me and for Kevin as well,” Ryan said. “We just started looking at the world differently.” In 2005, they bought a property in Waiohinu and built an off-grid home.

In 2011, Ryan’s father became seriously ill, and he and Kevin moved back to the mainland to help out. Ed Williamson died later that year. Meanwhile, they started an apiary here, first in Bryn Mawr, then expanding to Gladwyne, Devon and Malvern.

Along with their beekeeping work, they conducted educational programs for schools, libraries and community groups.

Almost immediately, the pair struggled with getting the East Coast bees to produce an adequate amount of honey, although they made plenty of wax for their salves, balms and candles.

“One of the problems that we faced was finding properties that weren’t either treated or weren’t close to people using stuff for their lawns — y’know, clean environments where the bees could be safe,” Ryan said.

Another challenge was finding enough food and forage for the bees. “We tried to keep bees in Elverson [Chester County], in more country areas, and they basically starved out there,” Ryan said. In situations like these, some keepers feed their bees sugar water, which he and Kevin were opposed to doing. They moved back to their property in Hawaii in 2016, but they still have hives in Gladwyne and Devon.

The honey has flowed freely since they went back; Ryan estimates their Hawaiian bees produce seven times the amount they did back East. “It’s a really rural area, and we’re surrounded by hundreds and hundreds of thousands of acres of state land,” he said. “…It’s like a honey bee sanctuary…there’s no Roundup sprayed along the roads… all that kind of stuff.”

Honeybees in the tropics are exposed to one-of-a-kind nectar flows that allow the Boys to harvest seasonal single floral honeys. They’ve also teamed up with Rusty’s Hawaiian Ka’u coffee roasters, also on the Big Island, to produce coffee-infused lip balm and salve. In all, they make 32 different products.

If you’re looking to check out their line locally, Chestnut Hill is the spot. Next Door stocks two of their salves, their sun protection cream, three types of lip balm, lip plumper, Hawaiian After Sun (a sunburn relief spray) and Ka’u Lava Cider, their spin on fire cider. The main store carries their Hawaiian chili pepper-infused raw honey.

Ryan, who describes Kevin and himself as “beegans,” sees their work as a form of tribute for making pollinated food part of their diet. “We kind of had this complex of pollinated food, and where we were getting it from,” he said. “…We kind of felt a responsibility, if you’re going to eat food that’s pollinated by bees, to have a hand in that, and make sure we were doing it in a way that was healthy for the bees, that was regenerative.”