We Beat Our Goal! 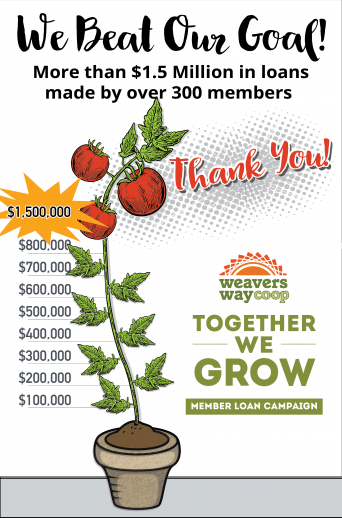 With more than 300 Weavers Way members participating, the Together We Grow Member Loan Campaign has taken in over $1.5 million in member loans, zooming past the original goal of $800,000 and overtopping the revised mark of $1 million — providing a remarkable testament to the dedication and generosity of our cooperative community.

We benefited both from “early adopters” who made pledges during the summer and early fall before the campaign was officially launched in October 2016, and from a wave of momentum right before the campaign ended Dec. 9, with nearly $400,000 received in the last two days alone.

“This was a complete win/win,” said Weavers Way General Manager Jon Roesser. “Not only would we prefer to pay interest to our own members over other lenders, but the success of the member loan campaign has demonstrated our credibility to the other lenders and added significant flexibility to the overall funding of this $4.3 million expansion.”

The Ambler store is scheduled to open in late spring 2017, with construction expected to start in the new year in the former Bottom Dollar grocery store. Expanding to a third location will allow Weavers Way to have a greater impact on local food systems and the local economy, creating 45 jobs, increasing business for local suppliers and helping even more members deepen involvement in their community.

Many people put a lot of effort into the campaign, from participating in phone banks and delivering loan documents to members to filling in a new tomato on the loan tracker poster — see Mt. Airy cashier Stephanie Johnson above! That included volunteers from both Weavers Way and the Ambler Food Co-op, as well as Weavers Way staff, the Member Loan Committee — Bernadette Dougherty, Lisa Hogan, Stu Katz, Emmalee MacDonald, Mira Rabin and Eileen and Mark Wenckus — and AFC's finance chair, Mike Crusi, who helped craft the offering memorandum.

This success also represents the joint work of two cooperative organizations — Weavers Way and Ambler Food Co-op. Weavers Way members came forth in great numbers to make loans, and nearly 20 percent of Ambler members also participated, joining Weavers Way in order to be able to do so.

Said campaign co-chairs Kathleen Casey and Laura Morris Siena: "We feel honored to have been able to hear from so many members who spoke of their excitement, their dedication to the co-ops, and their strong desire to build the cooperative economy and local community. In this way, the success of this campaign is not only in dollars raised, but also in the intangible but important effects of Co-op members participating and making our Co-op stronger."