We Beat Our Goal — Again! 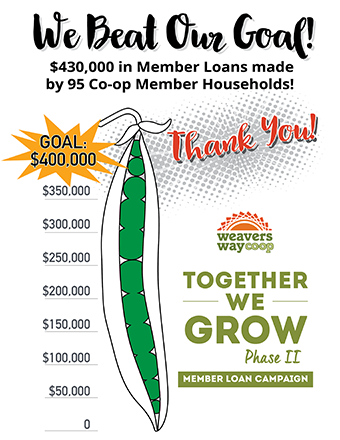 Phase II of our Together We Grow campaign was a great success! We raised $430,000 in member loans and $25,000 in increased member equity. Thank you to the 158 member households that participated in this second phase of our capital-raising campaign — we beat our goal, which was $400,000!

Proceeds from this campaign were used to pay off two bank loans, which means we've significantly lowered the Co-op’s monthly debt payments. In essence, we get to pay interest to our members instead of the banks!

Phase I, which was conducted in the Fall of 2016, raised more than $1.5 million in member loans and enabled the Co-op to develop our Ambler store. Between Together We Grow Phase I and Phase II, we raised $2 million!

While we had always planned on running a second phase of our capital campaign, we were motivated in great part by the growth in our membership. Since Phase I, more than 3,700 member households have joined the Co-op. We wanted to give our veteran and new member households an opportunity to support their co-op — and receive an incentive. Member loans provide member households interest of 4% on a 6-year, minimum $1000 loan. The equity promotion program offered $100 in EasyPay credit for households that added $400 in member equity.

Thank you to our Member Loan Committee members Zbigniew Bieniaszewski, Bernadette Dougherty, Lexa Edsall, Julia Bruno Watt and Mark and Eileen Wenckus for helping make the campaign such a success. And, of course, thanks to the members who were able and willing to participate!