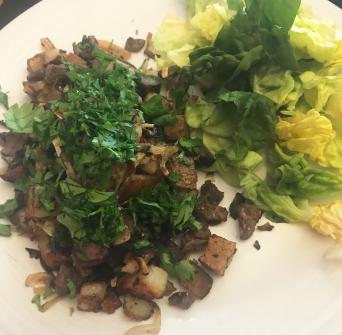 On a recent night there was a cooked potato, an onion and some leftover cooked meat in the fridge — just what I needed for pyttipanna, a light, delicious, versatile version of hash.

The name pytt i panna literally means teeny pieces in a pan. Vegans, don’t despair: Replace the meat with mushrooms or root vegetables and it will be equally delicious. I’ve been making this to use up leftovers since the ‘70s, but it’s become rather fashionable and is served in trendy Scandinavian restaurants.

It hardly needs a recipe. I use equal amounts of onions, potatoes and leftover cooked meat, which can be almost anything from roast filet mignon to frankfurters, pork chops, chicken, turkey or ham. You can make this with diced uncooked meat as well; just be sure to fully cook it.