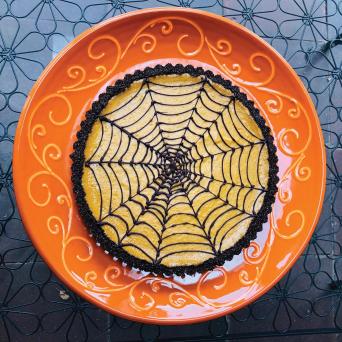 A little history of the pumpkin pie:

Early American settlers (1621) made their version of pumpkin pie by simply baking a whole hollowed-out pumpkin filled with milk, honey and spices. It was baked in the hot ashes of a fire pit.

Later on (1651) a famous French chef Francois Pierre la Varenne, published a recipe “Tourte of Pumpkin” which included a crust.

By the 1670’s recipes for “pumpion pie” started appearing in English cookbooks. It wasn’t until 1796 that the truly “American” style pumpkin puddings were being baked in a crust resembling present day pumpkin pies.

Preheat oven 350° with oven rack in the middle

Stir together finely ground graham crackers, butter, sugar and cinnamon and press evenly onto bottom and side of tart pan. Bake for 10 minutes until firm. Cool on rack 15 to 20 minutes.

Bake until filling is set, about 40 minutes. Transfer to wire rack and let cool at least 30 minutes or longer.

Place chocolate in a double boiler over barely simmering water: heat until melted, stirring occasionally. Transfer chocolate to a parchment paper cone. Pipe about 15 evenly spaced lines from one end of the tart to the other. Pipe curved lines around perimeter of tart connecting each spoke. Continue piping curved lines spacing them closer together as you near the center. Refrigerate tart until set, at least 1 hour or up to 1 day.