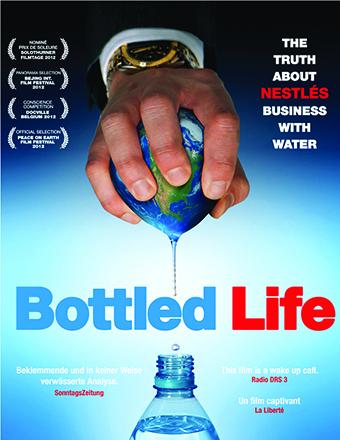 The Garage
542 Carpenter Lane
(across from the Mt. Airy store)

Those of us who take safe, clean water for granted should realize that hundreds of millions of people throughout the world do not have it.

When I see friends walk away while running water to wash dishes, I shut it off, risking censure. I can’t help myself. My friends may not realize just how precious water is.

Because of our concerns, the Weavers Way Environment Committee is sponsoring a screening of the 2012 film “Bottled Life” on June 9. Originally we had intended to show “Tigers,” but that film is now unavailable. Both films focus on Nestlé, which is the largest bottled-water company in the world.

Nestlé is notorious for buying rights to water in small towns, allowing them to pump as much water as they like for very little money. Now many towns are fighting this giant company and its powerful lobbyists and slick marketing. Just recently, on May 17, voters in Hood River County, OR, rejected Nestlé’s plan to bottle public water from the Columbia River gorge.

Nestlé is also under fire for promoting baby formula to the detriment of infants in developing countries. The International Baby Food Action Network, which promotes breast feeding, opposes Nestlé.

Because the Environment Committee wishes to discourage shoppers from buying Nestlé products, such as San Pellegrino water, we offered a tasting table at the Spring GMM. We wanted shoppers to know that there are alternatives to Nestlé products. On the bulletin board at both stores, we placed a diagram showing the many Nestlé items so people could know the source of familiar products.

“Bottled Life” (www.bottledlifefilm.com) has won a number of awards, including the Silver Plaque for science/nature documentary at the Chicago International Film Festival Television Awards. We will be showing it in the Garage, 542 Carpenter Lane. Doors open at 6:30 p.m.; the film begins at 7, and refreshments will be served. Keith Brown, an associate professor of sociology at St. Joseph’s University, will introduce the film and talk about consumer ethics.