Zero-Waste GMM: A Pretty Good Time Had by All — & (Nearly) No Trash! | Weavers Way Co-op
Skip to main content

Zero-Waste GMM: A Pretty Good Time Had by All — & (Nearly) No Trash! 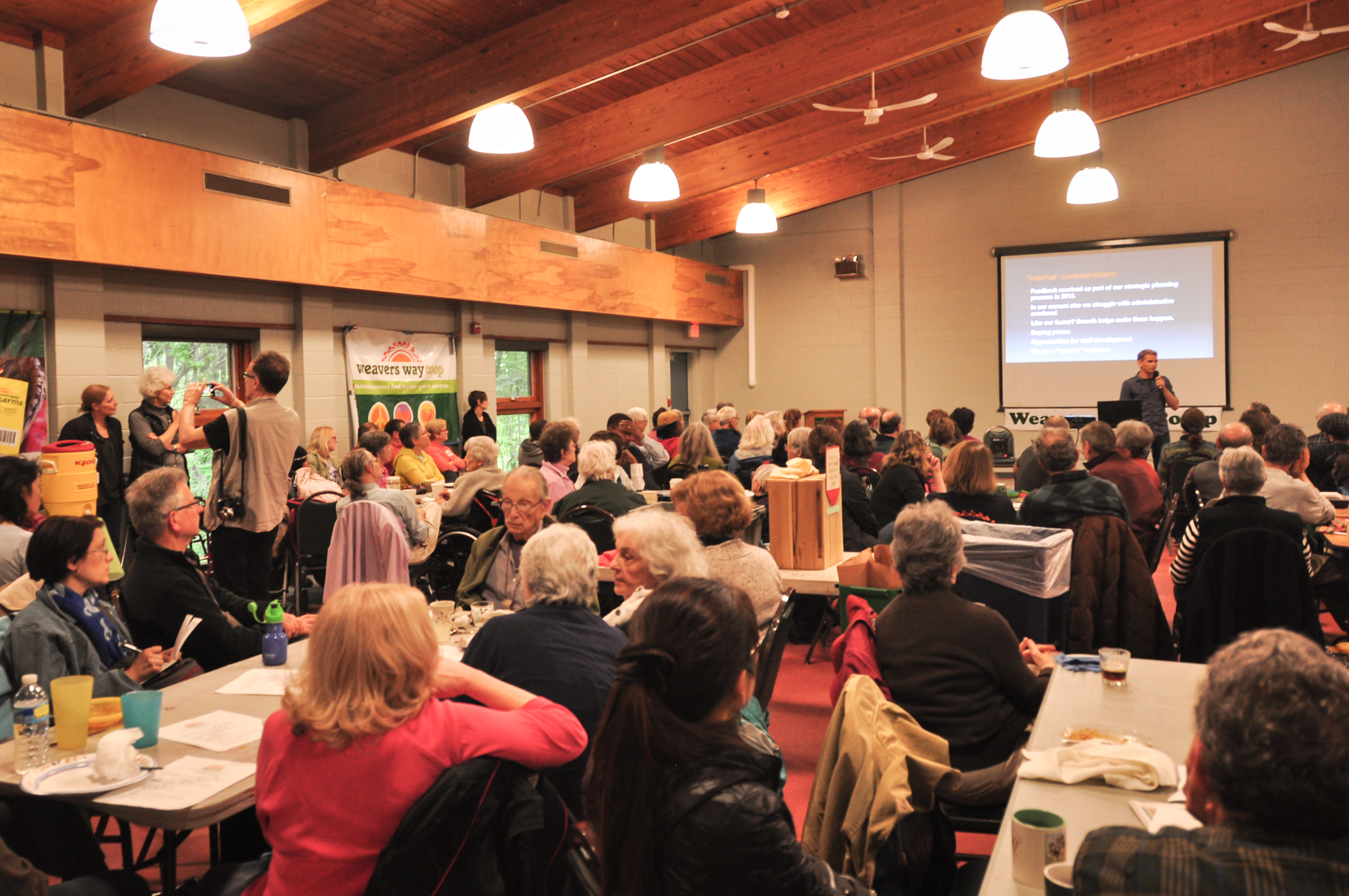 Click here to see a gallery of photos from the meeting

That sound you heard — besides jazz from the duo of Weavers Way members Art Miron and Rich Redding that had attendees bouncing into the 2016 Spring General Membership Meeting on May 15 — was a gentle clink of silverware on china.

Our own silverware and china, as a majority of nearly 200 Weavers Way members who showed up brought their own place settings to help ensure the gathering was a Zero Waste event.

The common dish-rinsing station, front and center, saw hard use.

And the official trash, a total of about a cubic foot stuffed into a 33-gallon bag, received a rousing round of applause when held aloft by Outreach Coordinator Bettina de Caumette.

The Weavers Way Environment Committee, which hatched the idea, collected only $67 for $1-a- plate-cup-spoon rentals, and were they happy about it.

“It was very positive. People seemed to be up for it,” said committee member Jeff Clark. “Good planning and good volunteers like Jeff,” added committee chair Sandra Folzer.

Of course, the delicious buffet dinner provided by Bonnie Shuman’s team in the Weavers Way kitchen in Chestnut Hill certainly helped with the mood, as did the multiple growlers of varied brews from Earth Bread + Brewery, flagons of red and white wine, and cookies and vegan cake from High Point and Roz’s, respectively.

By the time Board President Chris Hill opened the meeting, the crowd was sufficiently pleased with themselves that it took several tries for him to make himself heard as he reminded people to vote in the Board elections. “I don’t think I can talk any louder,” he said. “I’ll make it short.”

With that, he introduced Jon Roesser, who embarked on a three-part GM’s report, covering the Co-op’s financial condition (good), the situation with competition (better than expected) and the prospects for expansion (positive).

Jon noted that Weavers Way sales through the end of December were 7 percent higher than the prior year. “That’s really, really good — 5 percent would make us the darlings of Wall Street if we were publicly traded.” Since then, sales have dipped to just 4 percent better than the prior year. “That’s still really good,” he said. “It does show there’s been a slowdown in growth, and that’s been entirely our Chestnut Hill store: For December to March, Mt. Airy was still at 7.12 percent, Chestnut Hill at 1.46. . . . We attribute this entirely to the opening of a major competitor down the block.”

Still, as Jon noted, we had budgeted on the assumption that sales would drop 20 percent when Fresh Market opened. “So we’ve done really well,” he said.

“We’ve been talking a lot about why, and for us it comes down to three things. One, we’ve done a really good job running our business. Two, I also think that [Fresh Market] are not all they’re cracked up to be. The third thing is why this room is as packed as it is — the resiliency of the cooperative model. Our membership essentially locked arms and said, ‘No, we’re not gonna shop in that other store.’”

Jon’s next topic was the status of the proposal to open a third Weavers Way store and the likelihood that the store would be in Ambler, PA, about 6 miles north of Chestnut Hill in Montgomery County.

He outlined external market reasons for expansion — increasing competition from equity-funded natural foods markets, plus Weavers Way’s advantages in being able to expand rather than starting from scratch — as well as internal reasons — notably that the Co-op, as a mature business, needs to keep growing just to keep up. Ambler, he explained, is an attractive option because of its dense, walkable downtown and its relatively diverse population, both economically and ethnically. Weavers Way has been working for several years with the Ambler Food Co-op, an enthusiastic group of boosters of the cooperative business model, and a recent market study, completed last year but updated last month, shows that an Ambler Weavers Way is very likely to be very successful.

After questions came the election results: Board member Lisa Hogan announced that Chris Hill and Linda Morris Siena had been reelected, and that Joan Patton, a member of the Ambler Food Co-op, was the third winner. A bylaws change on the ballot also passed; it modifies the way patronage rebates are handled. (For more details, visit www.weaversway.coop/election-2016-results.)

Then Chris introduced the evening’s speaker, a catalyst for the Zero Waste theme: Consultant and Weavers Way member Alisa Shargorodsky.

Alisa started with “shopper’s remorse” — how she feels after shopping at a regular grocery store, “because everything you buy has packaging.” That prompted knowing nods and chuckles from the room.

Describing her work, she said she has been engaged to analyze every step of the Co-op stores’ workflows, “to observe where the trash happens,” counting and weighing to provide data for recommendations on how Weavers Way can reduce its waste burden.

Citing Weavers Way’s mission statement, which says, in part, We’re committed to the environment. We work to sustain a healthy planet, promote environmentally sound products and practices, encourage and support local and organic farming, and try to act with environmental consciousness in all our endeavors, Alisa said, “This is why I’m here. I’m very committed to helping Weavers Way attain this to the best of its capacity.”

She noted that while Weavers Way doesn’t supply plastic grocery bags, we do go through a lot of paper bags, roll bags for produce and plastic prepared food containers (900 a day). Then there are things for which no sanitary substitute is available, namely Styrofoam meat trays.

Part of the problem, she said, is that even when we recycle, many of these things aren’t REALLY being recycled, due to “contamination” —  e.g., plastic mixed with paper —  that may cause buyers to refuse materials that then end up being disposed of, not reused.

Meanwhile, plastic waste swirling in the ocean is photodegrading into small particles that are indistinguishable from plankton, making their way up the food chain.

“There’s too much of this stuff,” she said, “and it’s also a health problem. … After it leaves your house you don’t actually know what happens to it.”

“We didn’t always have all this plastic,” Alisa concluded. Items made of plastic “are a necessity for many parts of our life, but we just shouldn’t be treating them as a disposable item.”

Click here to see a gallery of photos from the meeting

That sound you heard — besides jazz from the duo of Weavers Way members Art Miron and Rich Redding that had attendees bouncing into the 2016 Spring General Membership Meeting on May 15 — was a gentle clink of silverware on china.

Our own silverware and china, as a majority of nearly 200 Weavers Way members who showed up brought their own place settings to help ensure the gathering was a Zero Waste event." data-share-imageurl="">