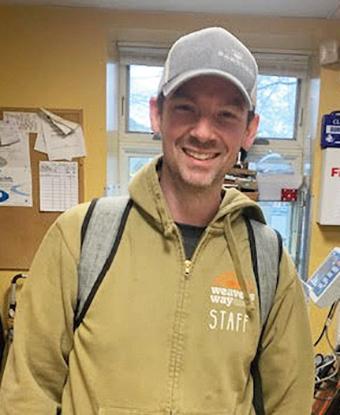 Where he’s from/where he lives now: He was born outside Columbus, OH, but mostly grew up in Springfield, Delaware County. He now lives in Ridley Township with his wife, Melissa, son Brayden (10), and daughter Rosie (2).

How he got to Weavers Way: He has roots in the grocery store business, having spent a lot of time as a child in his grandfather’s store in Ohio. In high school, he worked as a sandwich maker at a small market specializing in prepared foods in Delco. He rose up the ranks there, eventually becoming head chef and opening second and third locations for them. After 10 years there, he moved on to the prepared foods department at Swarthmore Co-op and landed here less than a year later.

Culinary training: He has an associate’s degree from the Restaurant School at Walnut Hill College in West Philly.

Thoughts on the job: “We’re very community oriented, and there are a lot of voices that have opinions. Which is good, because we want to provide everybody what they want as well as we can. But at the same time, it does get stressful,
because everybody has an opinion.”

Favorite Co-op products: “I like our hot bar, because it gives us a chance to be creative. It gives us the opportunity to showcase things differently — different cuisines, different flavors.” He’s also a fan of Guayaki Organic Yerba Mate iced tea and Prep Foods’ mango chicken salad.

Thoughts on the Co-op: “Coming here, it was definitely a big learning curve with the way co-ops are run, and the different way co-op policies are interpreted...At the end of the day, the nuts and bolts are the same, but maybe the way you’re screwing them in is different.”