Staff Spotlight: ‘Son of the Co-op’ Shares His Happy Self with Co-Workers & Shoppers | Weavers Way Co-op
Skip to main content

Staff Spotlight: ‘Son of the Co-op’ Shares His Happy Self with Co-Workers & Shoppers 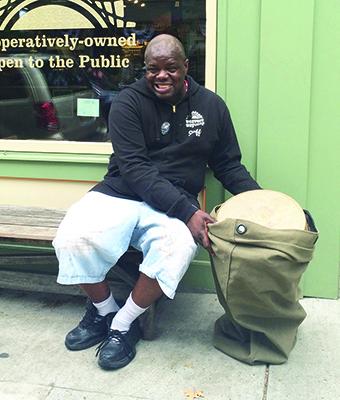 Karen Plourde photo
Kentu is always ready to get out his djembe drum.

Kentu X has worked for Weavers Way for more than seven years. It’s nowhere near as long as  some Co-op staffers, but in that time, he’s become a fixture at both Mt. Airy and Chestnut Hill, engaging shoppers and employees alike with his ready smile and helpful nature.

Kentu, who grew up in West Philadelphia, works grocery and customer service at both stores and also helps out at Co-op events. He came to Weavers Way via St. John’s Community Services, a nonprofit agency that develops creative ways to support people with intellectual disabilities in the communities where they live. “We basically help them find jobs, and then keep them and maintain them once they have a job,” said Sam Reynolds, a SJCS employment specialist. “Ideally, independence is the ultimate goal.”

St. John’s gets many of its referrals from the Pennsylvania Office of Vocational Rehabilitation and the Philadelphia Department of Behavioral Health and Intellectual Disability Services. Those agencies evaluate an individual’s fitness for work and then recommend them to outfits like SJCS to set them up in an appropriate environment. Kentu came to St. John’s in March 2008 and was hired by the Co-op in January 2009.

Participants in employment-readiness programs like the one run by SJCS come to the work world needing varying degrees of help. As someone who can get to work on his own and do what’s asked of him with minimal guidance, Kentu is at the higher end of that ability range.

“He’s a real success story for our program,” Reynolds said. “He’s very popular, works at both stores, knows the customers by name. . . . He’s really ingrained in the community.”

Reynolds believes the Co-op has played a big role in Kentu’s success on the job. “Natural supports are a big thing that we try to work on, and Weavers Way is really good about that,” he said. “Like any person, you rely on your coworkers to help you out and teach you things and watch your back, and Kentu’s got that for sure. . . . It’s lucky if that happens; we’d like it to happen more. It’s a testament to both sides of the system.”

For his part, Kentu, a 2001 graduate of Overbrook High, likes everything about working at the Co-op — the hours, the pay and the quality of food sold here. His favorite products are corn, apples, bananas and Noreen’s cranberry-orange cookies.

When he’s off the clock, Kentu, who recently moved into his own place in Germantown, likes to play djembe drum and hang out with his friends Steve and Tremayne. He’s also a fan of all four Philly pro sports and isn’t shy about offering his opinions on the teams, especially where the Eagles and Sixers are concerned.