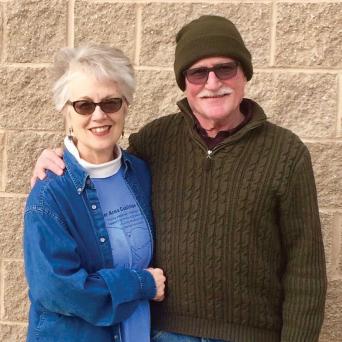 Joined Weavers Way: 2012. They were the 48th family who signed up to join the Ambler Food Co-op, whose membership was absorbed into Weavers Way’s last spring.

Where They Live: Ambler, within walking distance of the new store.

Current/Former Jobs: Marilyn is Director of Social Services at the Abramson Center for Jewish Life in North Wales. Binky previously owned and operated Wonder Cleaners in Horsham; he retired in 2013.

Why They Joined: Binky: “We don’t have a supermarket in this town, and we were thrilled about the idea of possibly buying food in Ambler again.” Marilyn: “It’s sort of all connected for us. These are our values — local, simple, understanding the balance of life and the connectedness of all of life.”

Co-op Cooperator History: As members of AFC, they hosted a block party at their home to increase awareness and recruit members. With the store open, Binky’s done front-end support, stocked shelves and helped out in produce. (As the retiree in the household, he does the hours.)

Family Facts: They have two grown children, Sarah and Ben. Sarah lives in Mt. Airy and is also a Weavers Way member. They’re also parents to golden doodle Meg and Merlin the cat.

Food Faves: They’re big fans of Solebury Orchards apple sauce. Marilyn: “I can’t keep it in my house. It’s like eating apple pie, and it’s only apples.” They also enjoy Le Bus breads, salmon, Personal Chef cornbread and many items from Prepared Foods. Binky: “My goal is never to go to another supermarket … I used to drive probably 12, 15 miles a week. Every time we needed something, I’d have to go to Spring House or Flourtown or George’s Shop ‘n’ Bag. Now I’m walking over here.”

A Little Co-op Love: Binky: “Sometimes, I just walk over, because I’ve already gotten my groceries, and say hello to people.” Marilyn: “[General Manager] Jon [Roesser] wrote an article a couple months ago that this is a community place, it’s like your third place. And that is so how we relate to it.”