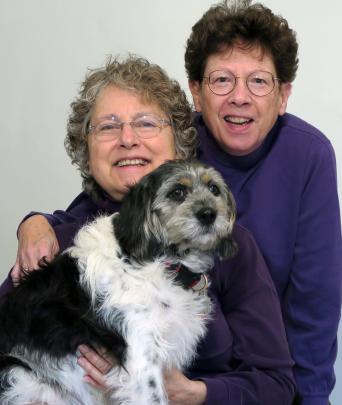 Live in: Blue Bell Hill, with their rescue dog, Mila.

Current jobs:  Helen is a psychotherapist in private practice. Jacqueline, a former Fox 29 reporter, had her own video production business for many years, but has scaled back recently to write full time. She just finished her first novel and is looking for an agent.

Why Helen joined: “It was convenient. I liked the fact that you could buy, even then, organic food, better-quality food in many cases. It just felt more homey than the Acme.”

Thoughts on working membership: Jacqueline: “When I first moved in, [Helen] was like, ‘So I’m a member of the Co-op, and now that you’re living here, they have a household rule, so we each have to do six hours.’ And I’m like, ‘Really?’ But I really kind of came to like it, and I like doing different things. So I saw how wonderful it was to be part of that community.”

Co-op job history: Jacqueline occasionally writes for The Shuttle. She’s also done assorted jobs in the basement of the Mt. Airy store. Helen likes to vary her shifts, from packing to washing aprons to helping put out with flowers. However: “My fallback is always the deli. I love working in the deli.”

A little Co-op love:  Helen: “When we went to the General Membership Meeting when the mayor came last year [November 2017], he talked about the city, and he talked about the Co-op. . . . it was such an important meeting, and summary of the values of the Co-op, for diversity, for shopping local, for not polluting, for connection. That’s the larger reason that we love it. It’s our values.” Jacqueline: “I love that when we go for groceries, or we get [Mila] treats and things like that. . . . and there’s the Co-op, and there’s always people around. It’s really this community that holds you.”