Liberate Your Lawn & Garden: The Time Is Now to Rid Your Yard of Invasive Ground Clutter | Weavers Way Co-op
Skip to main content

Liberate Your Lawn & Garden: The Time Is Now to Rid Your Yard of Invasive Ground Clutter 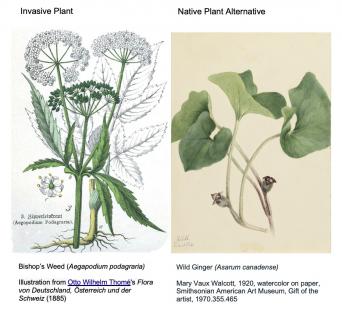 There is an old saying — “An ounce of prevention is worth a pound of cure.” When it comes to weeds and invasive plants, this is totally the truth! And fall is the time to handle them.

Before I was pregnant with my daughter, I had worked for four years to eradicate Bishops Weed (Aegopodium podagraria) from my side yard. The tapestry of fibrous roots with small nodules were the bane of my existence. After every rain, I would head out and dig up a few plants, working carefully to follow each to unearth all of its small bulbs. Time and again the roots would break, guaranteeing yet another season of weeding.

After a couple years, I realized it wasn’t enough to dig the plant up; I also needed to prevent its seeds from hitting the ground. From that time forward I would cut off the flowers after they bloomed to prevent them from going to seed. My time and attention eventually paid off, and the combination of digging and seed removal suppressed them.

However, two years later, while nine months pregnant with my daughter, I saw it — one small plant sitting quietly between bricks in my walkway. I couldn’t bend over to pull it out and I distinctly remember thinking that I would get it once the baby was born in April.

She was born, and I was a bit exhausted. Spring came and went and, in that time, that one plant found its way under our walkway and over to the slope at the front of our house. And again, I distinctly remember thinking “I will get it out when it blooms in July.”

It didn’t bloom. And I forgot about it as the rest of the garden came in.

Eight years and many excuses later, my front slope was now covered in Bishop’s Weed. That one small plant had grown to over 200 square feet. and removing it this time was going to take a whole new approach. It actually took two years and implementing the full-scale nuclear option to eradicate it: The English ivy (Hedera helix), Japanese pachysandra (Pachysandra terminalis) and periwinkle (Vinca major and V. minor) it had gotten friendly with all had to go as well.

Moral of the story: In 2010, tired or not, I should have got down on my hands and knees and pulled that little sucker out!

Invasive exotic plants are all over Fairmount Park and in yards throughout the region. Some of them we call weeds, and a weed by definition is any plant you don’t want, native or not. But Bishop’s Weed is an invasive.

Autumn is the time of year when perennial plants (shrubs and trees included) put most of their energy into root development. Rhizomatic plants like Bishop’s Weed are working hard to guarantee their survival by quietly branching out underground and setting seed above ground. When undisturbed, the fruits of a plant’s labor pay off. To this end, good old hand pulling is really the way to go. Cut the seeds off first, then pull, taking care to get the roots; your work will not be in vain.

So get your pruners, trowels or planting knives and take a stand against weeds in your garden and community before their roots run further afield. Also, don’t forget to vote. There’s a bunch of noxious invasive weeds in Washington that plague the state of our nation. They must go and now is the time to take that on!