by
Charlie McCurdy, for the Shuttle 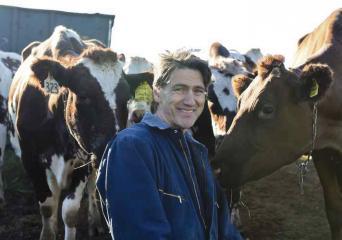 After a six-month COVID-imposed hiatus, Mark Lopez, owner of Wholesome Dairy, and his partner in science, Hudson VanOrmer, have recently resumed their research into developing alternative plastic food packaging made of milk products and plant fiber at Lopez’ 100-acre dairy farm in Yellow House, Berks County.

“There’s lots of library work [and] a whole lot of planning, talking and meeting,” Lopez said. “But that’s what research is. This month, we’ll get out the lab coats and test tubes.”

Lopez, 56, and VanOrmer, his niece’s husband and a formulation chemist, were awarded a $123,884 grant for the project from the Pennsylvania Department of Agriculture’s Dairy Investment Program earlier this year, and they have a three-year window to spend it. A little more than half of that amount will go toward developing the packaging composite material; the rest will finance construction of a building for research and storage.

Their idea is a twist on galalith, a casein and formaldehyde-based plastic that was invented in the late 1800s. Among other things, it was used to make artificial ivory and buttons and was employed to insulate electrical wire. Petroleum-based plastic was invented at the turn of the century, and over time, it replaced galalith.

The raw milk sits at the center of their research.

“Phase One of the grant is the experiment phase,” he said. “We’re trying to develop food quality milk plastic with the intent of making a milk-based container for yogurt or food. The hard part is taking the material and scaling it into a container.”

The casein proteins in milk start sticking together as you lower the Ph of the milk, as when making kefir, yogurt or cheese. Lopez and VanOrmer are trying to find a way to mold it into a usable substance.

“We don’t want to use just milk protein,” he said. “We want to use plant fibers as well. The trick is finding the right one. We want to use local milk and waste-stream fiber such as corn, hemp or grasses.”

Lopez is passionate about the health benefits of unpasteurized milk because it contains conjugated linoleic acid, or CLA — an 18-carbon-chain fatty acid that’s produced in a cow’s rumen. CLA has been found to fight cancer in mice, and has been credited with reducing body fat.

Finding alternate and organic uses for a product such as milk makes sense to Lopez. Sustainability is central to his work – and in his blood.

“I was raised frugally,” he said. Both parents were teachers, and he observed his mother repurposing plastic bags into bread bags, glass jars into containers for canned preserves, and leftovers into creative new dishes.

Despite a decline in the overall fluid milk market, he sees no decline in demand for raw milk. During the early part of the pandemic, when a lot of panic buying was going on, he found he couldn’t meet the increase in demand. Since then, sales have returned to typical levels.

“Cows like boring, and my job is to give them a stable environment,” he said.

Wholesome Dairy is home to about 80 cows. Lopez has around seven employees and sells his products, including raw milk, cream-top whole milk yogurt, kefir and Greek style yogurt, to about 30 retailers in southeastern Pennsylvania, including Weavers Way.