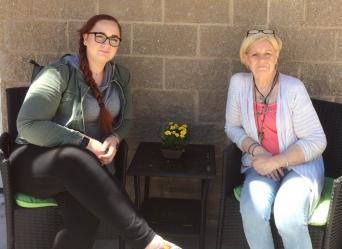 Current jobs: Eileen’s a naturopath with office space at The Becoming Center at Artman in Ambler and is also a chiropractic assistant in the area. KateSara is a nanny and runs the nursery and Sunday School program at St. Paul’s UCC Church in Fort Washington. She also started a small biscotti company called Two Hearts Home that she runs out of their house.

Why they joined: One of Eileen’s bosses gave her a gift certificate; he was familiar with the Co-op from having grown up around the Mt. Airy store. She used part of the gift certificate to pay for her membership. Eileen has a history of informal co-op buying that goes back to the 1970s.

Why they’re working members: Eileen: “To support causes I believe in, and to keep it more personal.” KateSara: “You feel a sense of ownership when you are.”

Co-op job history: They recently pitched in to get Ambler’s bulk department back in shape during a time of staff transition. Eileen’s worked on the front end, and they’ve both helped out in produce. They’re also big fans of facing (straightening the shelves by pulling new items forward) and will sometimes do it when they’re shopping.

Favorite Co-op products: KateSara buys the ingredients for her biscotti (“Where else can you buy lavender flowers in bulk?”), and they do their big shop on Sundays in Ambler. They estimate they do 75-80 percent of their shopping at the Co-op.

A little Co-op love: Eileen: “We’ve become kind of buddies with some of the people who work here… It’s more personal… I just like being in that atmosphere.” KateSara: “When my brother and his daughter come up from Virginia, we always come here…and then she can play and read in the corner [of the café]… How many food stores who have a cafeteria have a little kids’ area?”