Vegan Alert: A Stop at V Marks the Shop 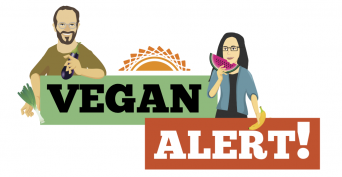 In response to the two recent letters to the editor criticizing our Vegan Alert! Column, we much appreciate the feedback. Sorry the banter was off-putting; we are feeling our way with this column, which was conceived as taking a light, freewheeling and humorous approach toward veganism, vegan food and food in general, while still being somewhat educational. The column reflects our personal approaches toward and reflections on veganism, food, our food system, etc. and is not necessarily reflective of any official Weavers Way stance on any of the topics or products discussed.

We recognize products like Beyond Meat have a role in offering a vegan choice for people who may not otherwise choose a vegan food, and could play a role in shifting people’s attitudes toward vegan food. We also wanted to recognize that there is a flip side to these kinds of products. For example, shoppers wishing to avoid GMO ingredients may not realize vegan Impossible Burgers are made with a GMO yeast.

Since ethics were also mentioned around veganism, let’s recognize there are a number of ethical questions arising out of examining our food system, having to do with technology, price, availability, labor, packaging and all the other impacts our food choices have on ourselves, our community and our planet. Since it’s a complex system, and since few people examine all the impacts of their purchasing decisions, we want to at least allude to a few of them now and then, which maybe would pique some reader’s curiosity to find out more.

This month, Norman and Jeannine visited V Marks the Shop, an all-vegan convenience store in South Philadelphia, and discovered the many different flavors of vegan jerky.

J: An all-vegan market in South Philly. How cool is that?

N: I think that is the first time I went to a store not having to check if the products were vegan or not.

N: I saw a number of products I didn’t know existed, like vegan cotton candy.

J: I was impressed with the deli meats and cheese selections from the Herbivorous Butcher. I’ve been wanting to try their products for a while.

N: Interesting location, too. Wouldn’t expect to find a vegan corner store by itself with no other surrounding supportive retail or fitness places or stuff like that. I hope it does well.

J: Yes, it does seem like a residential area. However, it is within walking distance to Miss Rachel’s Pantry, one of my favorite vegan restaurants, and the new market Rowhouse Grocery. They also had some vegan items, like a couple delicious ice cream flavors from a neighborhood resident.

N: V Marks the Shop bills themselves as a vegan convenience store. First of its kind that I’ve ever heard of.

J: I can’t think of any others either, but I do know vegan grocery stores exist in Europe and I believe Portland, Oregon. Did you buy anything?

N: Yeah. I bought vegan jerky (pepperoni flavored), a couple of chocolate bars made with coconut milk, and a Tattooed Mom corn and bean burrito, which was excellent.

J: I also bought some jerky (maple bacon flavored), a Tattooed Mom fried chicken wrap, (also delicious), and the Herbivorous Butcher cheese, which I ate within two days due to having little self control. I appreciate that they sell products from other local businesses, like Crust, Tattooed Mom, Soy Cafe, and Miss Rachel’s Pantry.

N: Why so little self-control?

J: Because it was like a party in my mouth.

N: So you’re a party girl? I heard you’re a Deadhead.

J: I’m a veghead Deadhead. I prefer veghead over vegan.

J: I think it fits better with the party theme.

N: I always thought the word vegan was weird, like you’re from the planet Vega.

J: Sometimes I do feel like I’m from another planet among a bunch of sinners. My ex used to call non-vegans “sinners”.

N: Was he religious?

J: I’d rather not give him too much mention.

N: Understood. Speaking of convenience stores, have you ever gone to a Wawa and used the sandwich kiosk to order a vegan hoagie?

J: Yes, actually, last summer. I don’t really recall what was on it but I’m sure it had pickles. It would be neat if V Marks the Shop decided to make to-go sandwiches with some of their products, like the Herbivorous Butcher deli meats.

N: I wonder if vegan will be like gluten free was five or six years ago. All of sudden it became really popular.

J: I think we’re already there or will see another boom in the next five years. After all, Philly now has a vegan restaurant week — unlike other big cities. Do you ever wish the Co-op was all vegan?

N: I wouldn’t say I ever wished the Co-op was more vegan, but I do wish that people would eat more vegan food.

J: Well, if we get down to the basics, we could just survive on fruits and veggies in their whole form and strip away all the boxed items in the store.

N: Where does that leave the paleo and ketogenic people?

J: Ya mean the sinners?

V Marks the Shop is located at 1515 McKean Street in South Philadelphia. Stop in and support this local business!

J: An all-vegan market in South Philly. How cool is that?

N: I think that is the first time I went to a store not having to check if the products were vegan or not.

N: I saw a number of products I didn’t know existed, like vegan cotton candy." data-share-imageurl="">