Good News — and Good Eats — at the Spring GMM

by
Richard L. Stein, for the Shuttle

Following the results of this year’s election, three new Board members — Hilary Baum, De’Janiera B. Little, and Sarah Mitteldorf — will take their seats at this month’s meeting of the Weavers Way Board of Directors. The winners were announced at the spring General Membership Meeting on May 4 at Germantown Academy in Fort Washington.

Leadership Committee Chair Lisa Hogan presented the results to a crowd of more than 100. She reported that voter participation was the highest it has ever been this year and joined Board President Josh Bloom in expressing gratitude to the Board members whose terms have now ended — Meg Gruwell, Joan Patton, and Chris Hill.

Lisa reserved special praise for Chris, who served on the board for 12 years. During his tenure, he created the Urban Farm Bike Ride Tour and played a key role in the expansion of the Co-op from Mt. Airy to Chestnut Hill and then to Ambler.

See a gallery of photos from the GMM at the bottom of this page.

But several in the audience made it clear that they didn’t just come for the presentations. Joan Leiby, a member since 1981, said she comes to meetings because, “I love the Co-op, and the food is always good.”

This year’s menu featured Mexican-themed treats. One member, who wished to remain anonymous, said he had been coming to meetings for 10 years. “Usually there’s good food,” he said, conceding, “and I’ll usually hear something interesting.”

The interesting story Jon told in his presentation outlined a picture of a business that is healthy and growing. “Revenue is up 12 percent so far this year, and gross profit has increased at a higher rate than revenue,” he said.

Last year’s net operating loss was high, but this year is projected to wipe out any losses, he asserted. The smallest store, in Mt. Airy, still gets the most business, but revenue has grown at every outlet, including a growth rate of more than 11 percent in Ambler.

Nina was upbeat and enthusiastic in her presentation about the farm, despite coming off a year with 26 more inches of rain than usual. “You can’t underestimate the support we feel from members,” she said. “It’s really powerful.”

Lisa Mosca is the new director of Food Moxie, an affiliate of the Co-op that partners with schools and community organizations to inspire people to grow, prepare and eat healthy food. Lisa said the program has served more than 2,000 meals to participants, 90 percent of whom are below poverty level.

The Equal Exchange duo pitched the quality and social responsibility of their coffee, tea and chocolate; their free chocolate samples disappeared quickly.

Before the official start of the program, Leni Dow, head of the Weavers Way Environment Committee, canvassed the room promoting participation in the TerraCycle Recycling Program. Its website explains that TerraCycle is “eliminating the idea of waste” by recycling the “non-recyclable.” This year’s news, Leni announced, is an expansion of collections to include all brands of plastic razors and packaging.

Sachiyo Searles, a member who said she makes sure to attend the GMM every year, summed up the feeling at the event.

"I’m totally committed to the Co-op,” she said. “We should participate in the decision-making process and have an opportunity to have some influence [on its direction]." 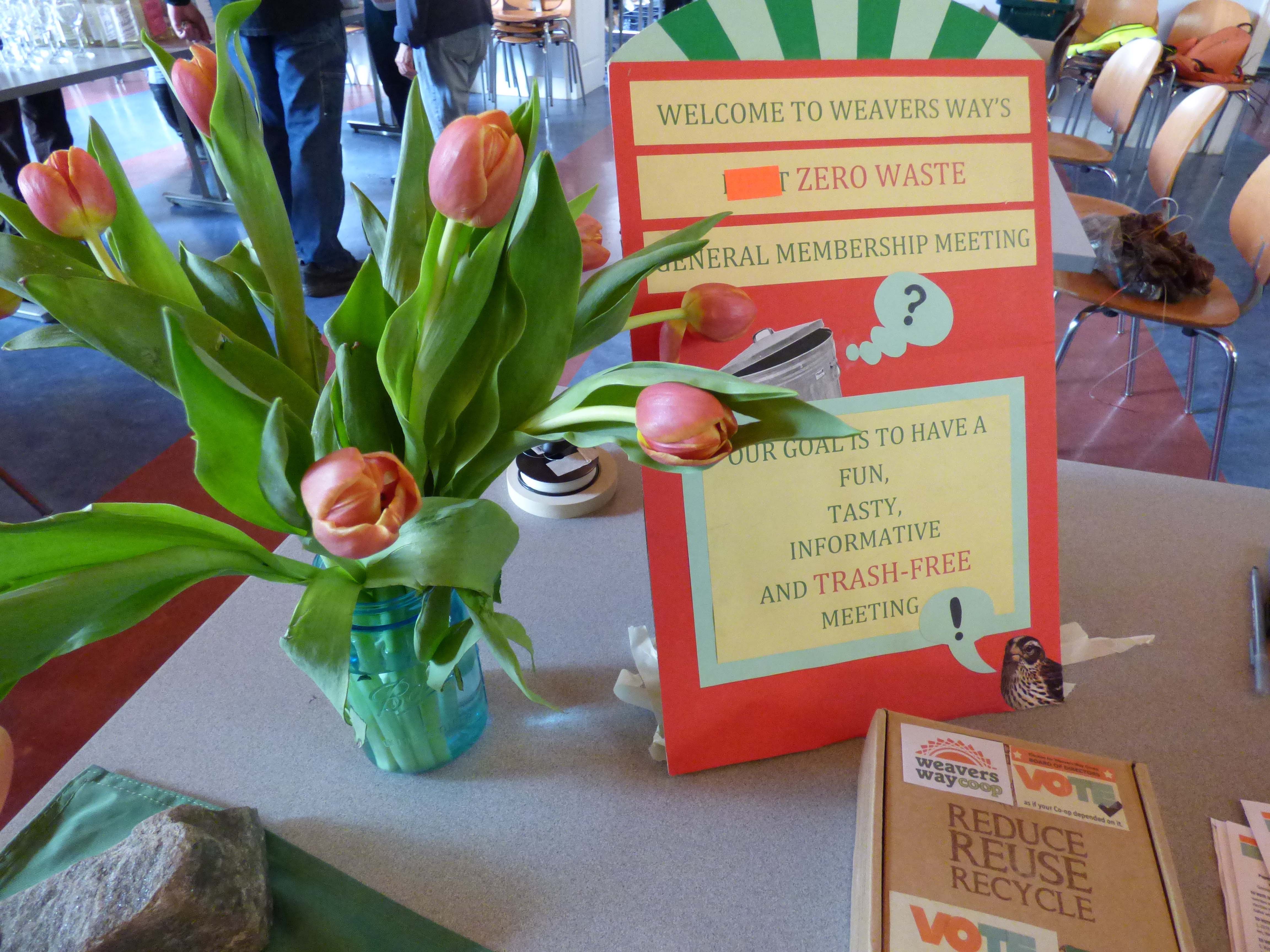 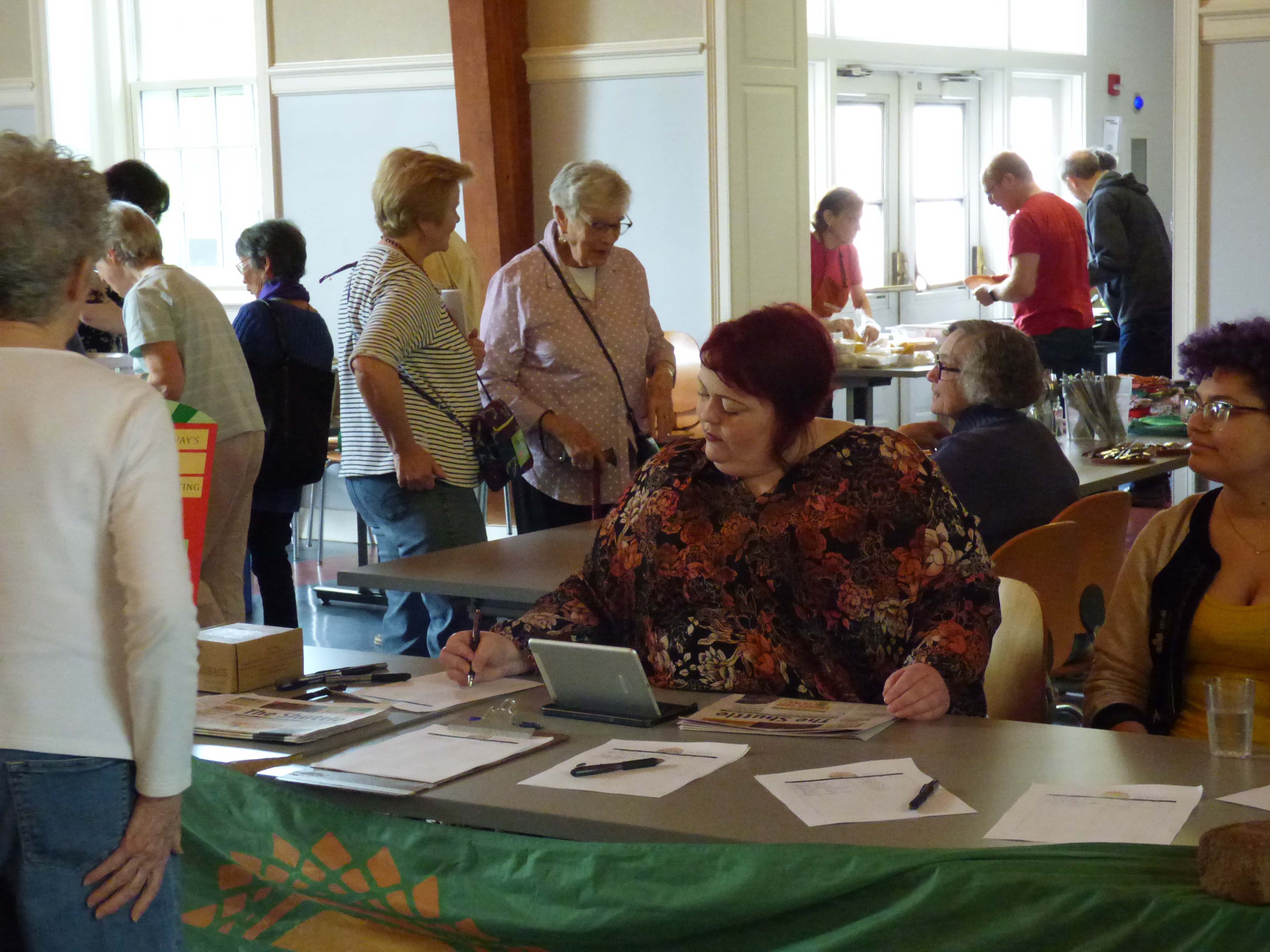 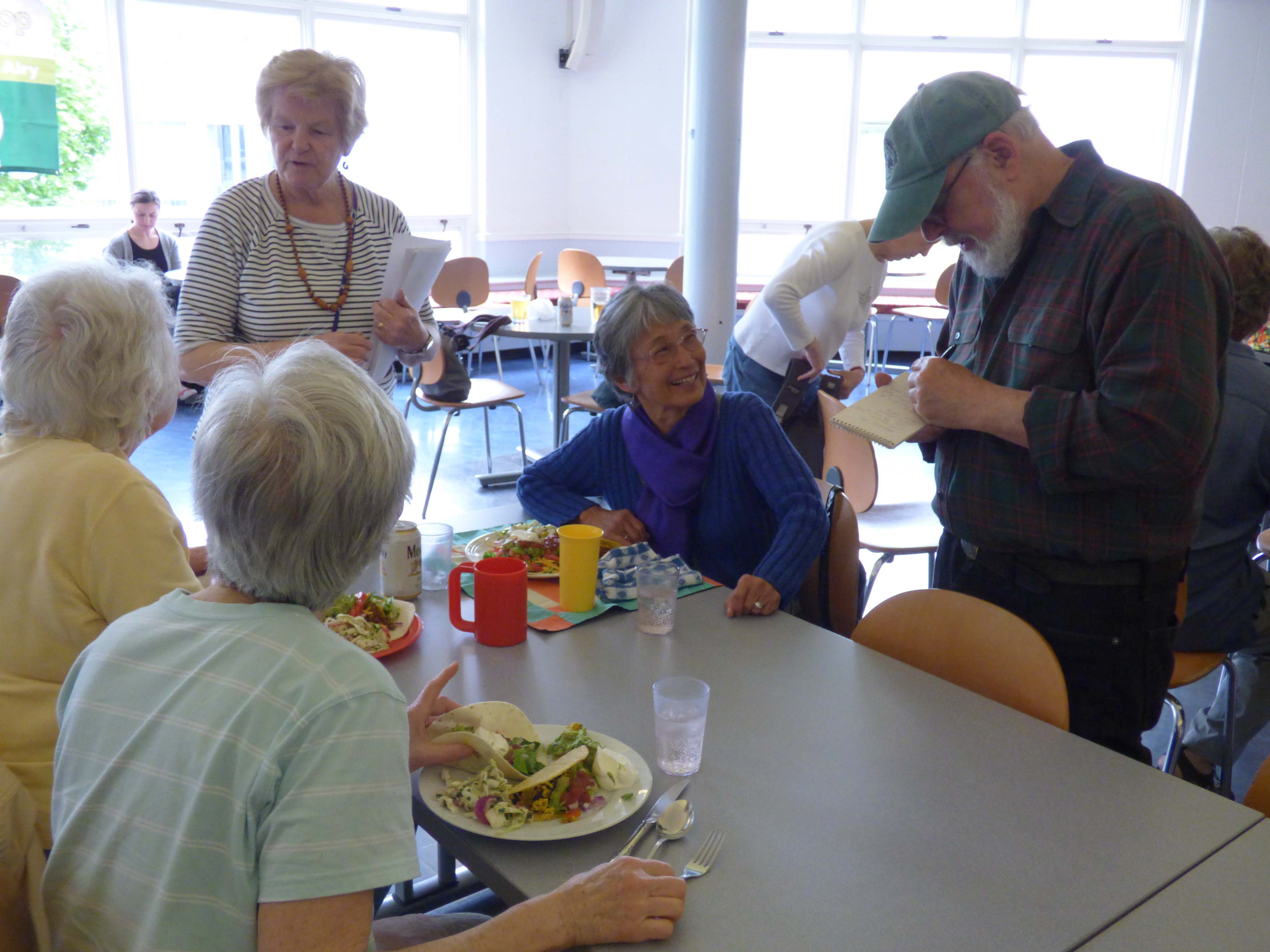 Members pause from their repast to be interviewed by Shuttle Reporter Richard L. Stein. 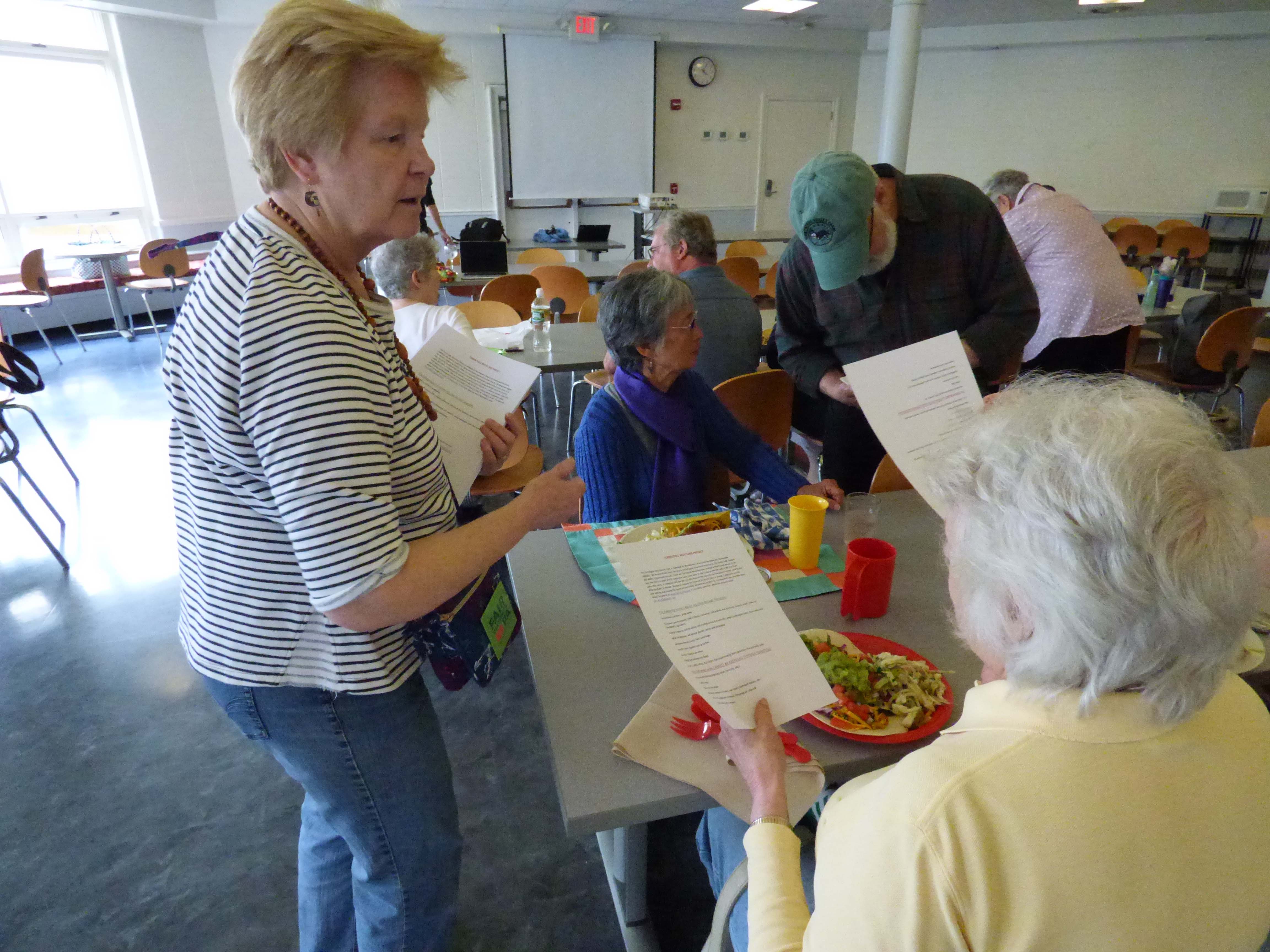 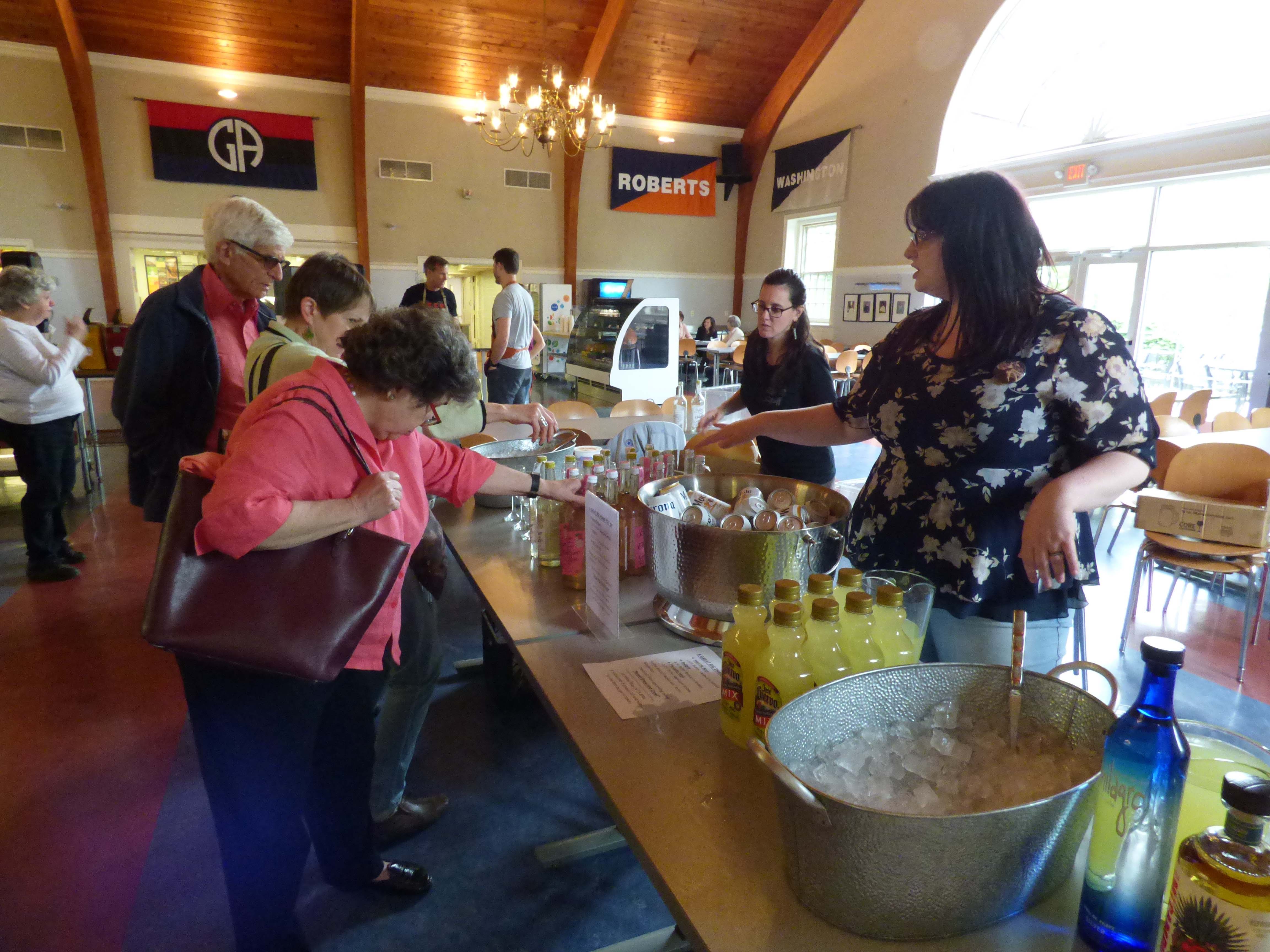 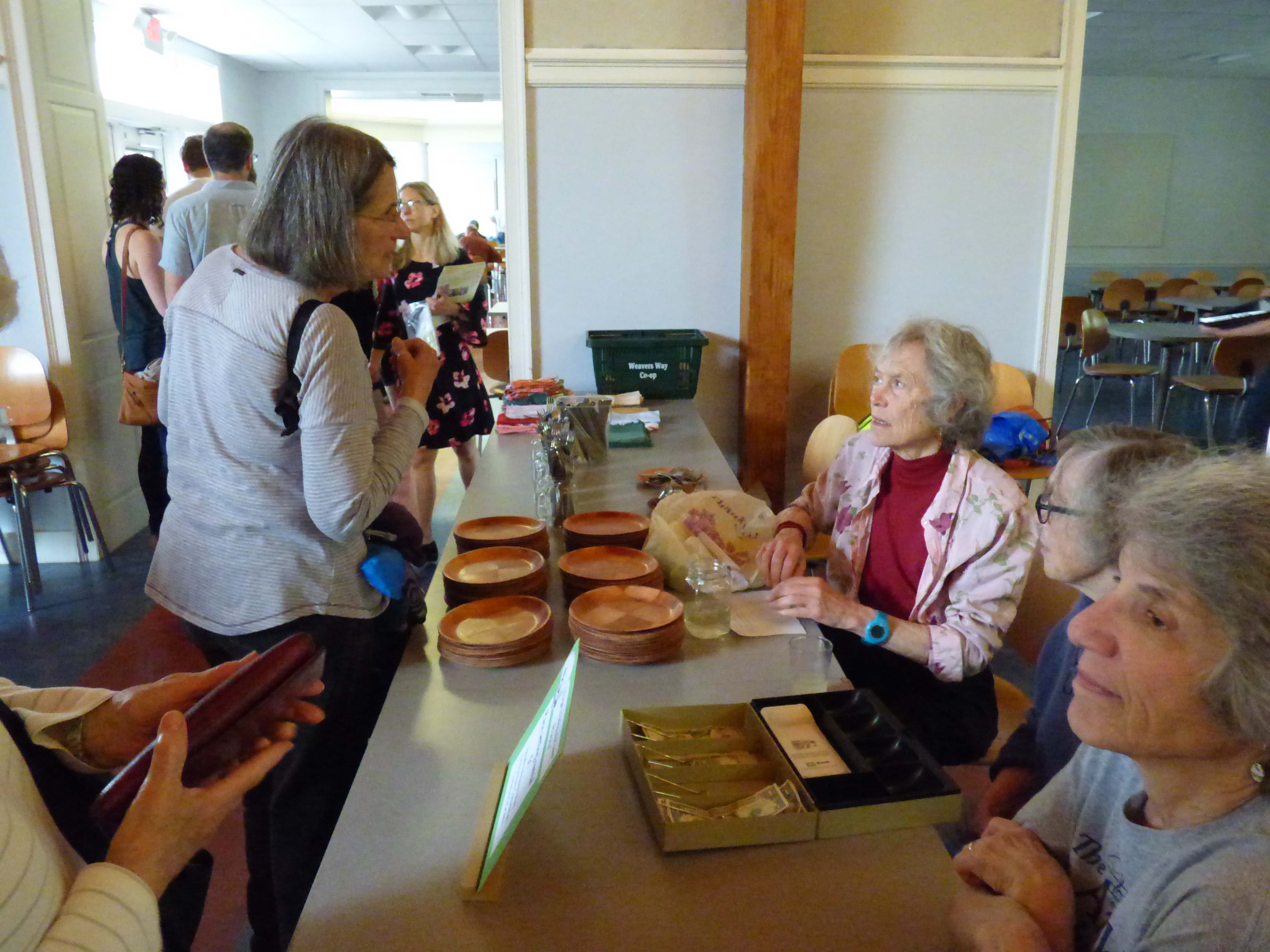 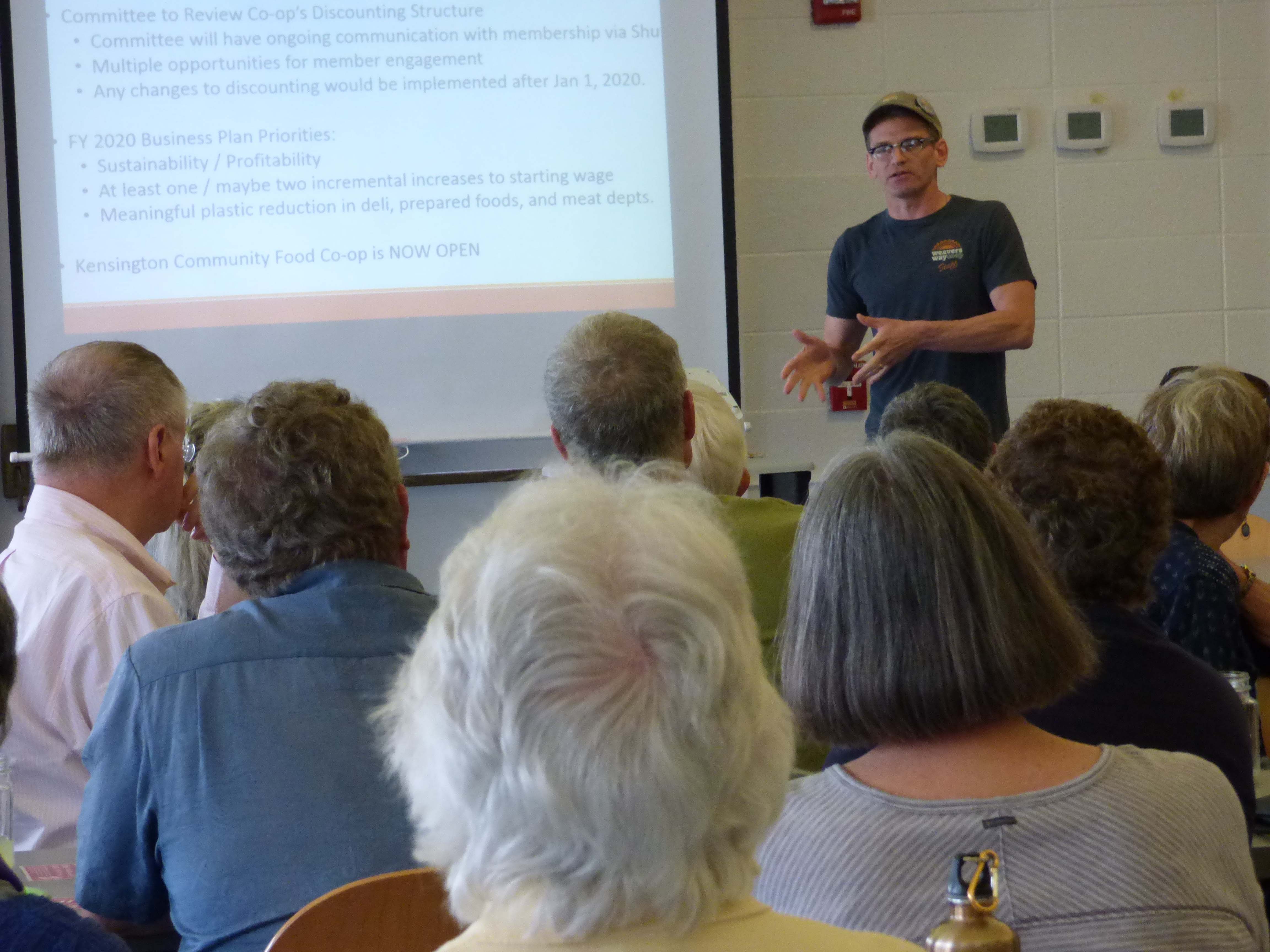 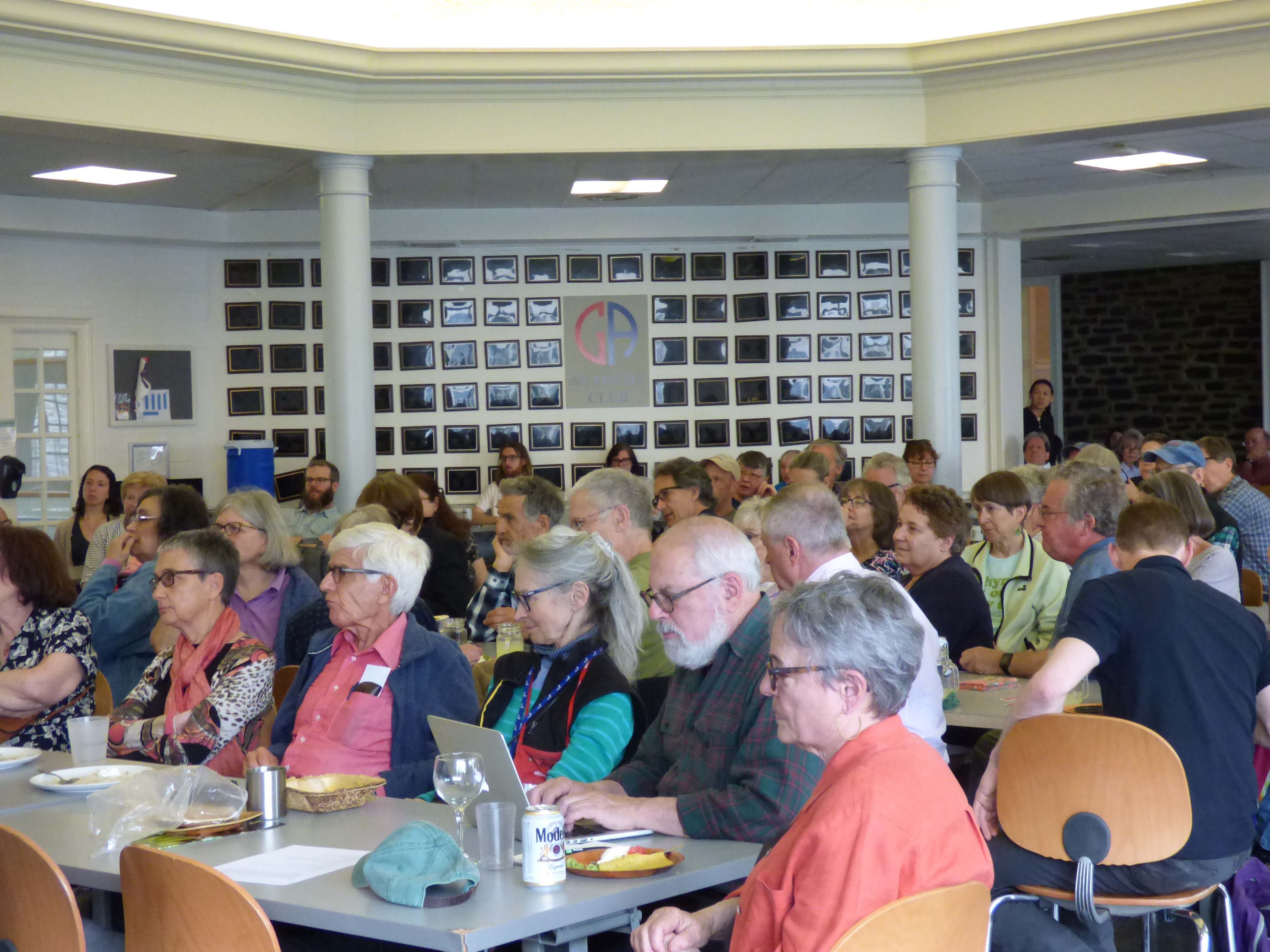 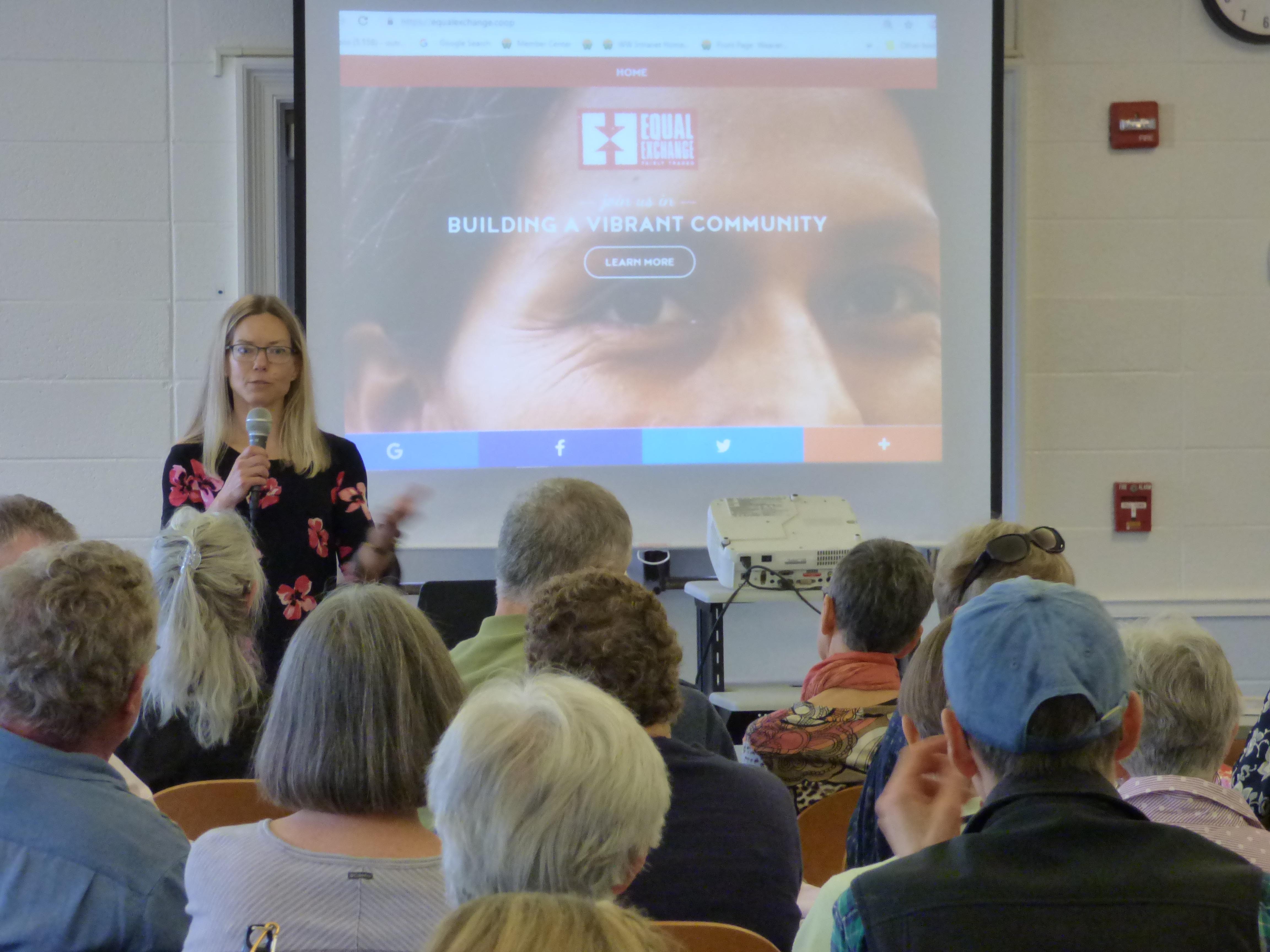 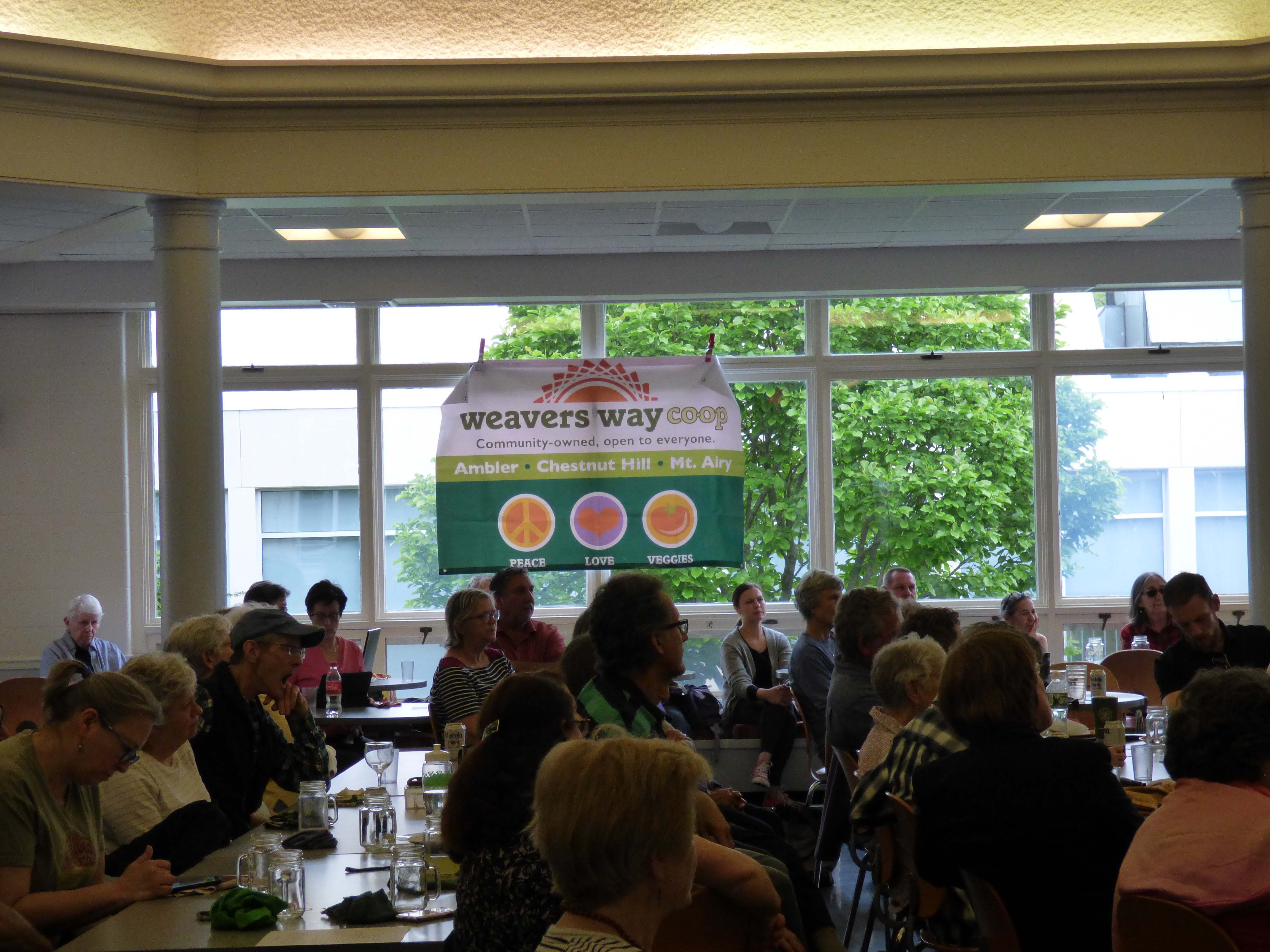 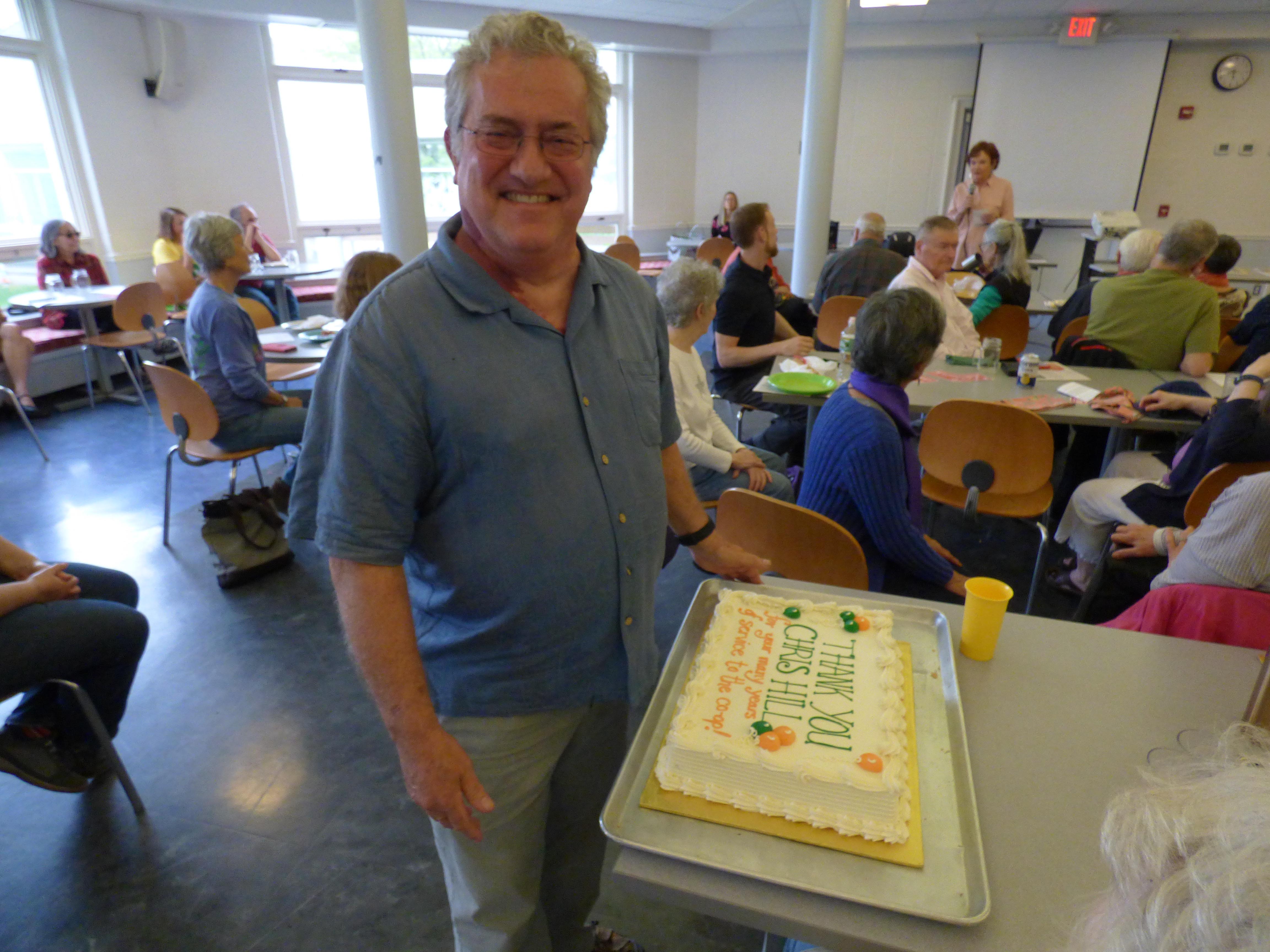 Former Board President Chris Hill celebrates 12 years of dedicated service with a cake he deigned to share. 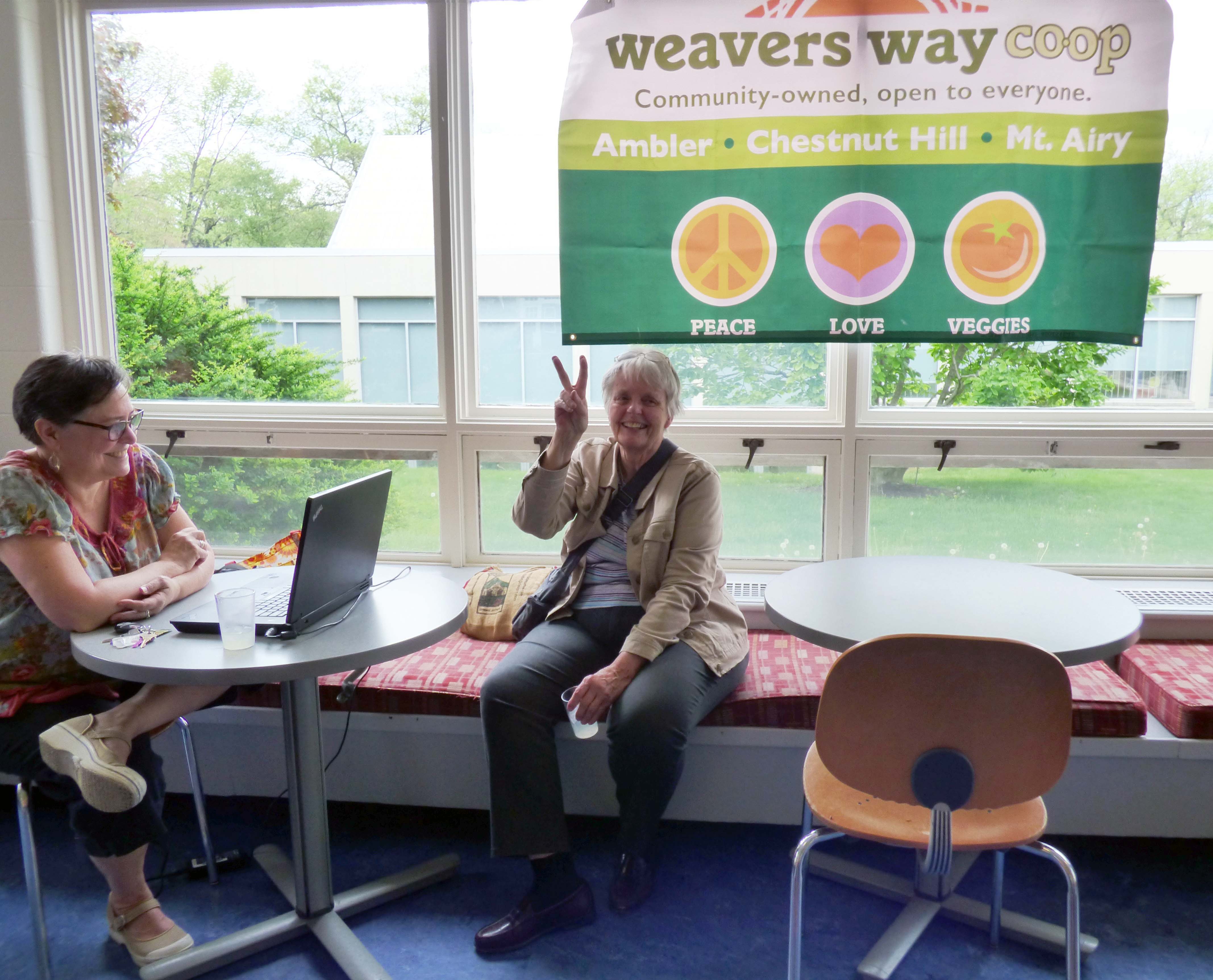