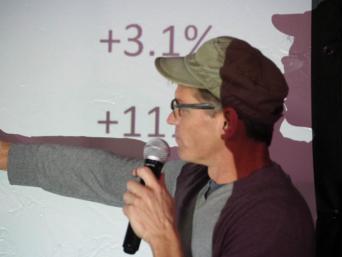 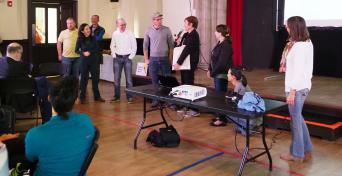 photos by Peter Handler
Top: GM Jon Roesser goes over the FY2019 numbers; Bottom: The Co-op’s Board of Directors presents Jon with a cutting board in thanks for his leadership.

My sincere thanks to all of you who came out to the fall General Membership Meeting last month. We had a great turnout and I hope those of you who were there felt the same sense of good cheer and comradery as I did.

While our GMMs are open to all members, I recognize it’s not practical — and indeed it would be quite impossible — for everyone to come (with over 20,000 individual member-owners, we’d need to rent out the Wells Fargo Center). So I’d like to present a quick overview of the Co-op’s current fiscal health.

We recently received a clean report from our auditors for Fiscal Year 2019 (which ended June 30), and the report has been reviewed and approved by the Co-op’s board of directors.

Gross profit — the money left over after we’re done paying our vendors for the products we sell — rose at an even higher rate, to $10,966,000, 13.1% above prior year, reflecting improved margins and reduced product shrink.

Our operating expenses are dominated by labor costs — wages and non-wage compensation — which were $7,499,000 in FY2019, a 3.1% increase over the previous year. We have increased our starting wage from $10.50 to $11.50 and hope to be able to raise it to $12 at some point in the coming months. Eighty-six percent of our staff is now earning at least $12; 38% of our staff is earning $15 or more. We have more steps to take in our plan to increase wages overall, but we are making meaningful progress.

Generally, we’re in pretty good shape. It was our goal to break even in FY2019, one year after our expansion to Ambler. We achieved that goal and we expect to build on our success in the year ahead.

The Co-op’s cash position is good and improving. Cash — that’s money we have in our various operating bank accounts and money held in reserve in U.S. Treasuries — is currently just over $1.7 million. We expect to grow cash further this year and our goal is to eventually maintain a cash reserve of around $2.5 million.

Maintaining a healthy cash reserve is prudent as we look to the near-term future. For one, we have about $400,000 in member loans maturing in calendar year 2020 (both the final round of Chestnut Hill expansion loans and the first round of Ambler expansion loans). We fully expect to have sufficient cash to make payment on these loans as they mature.

Beyond that, maintaining a healthy cash reserve is necessary in anticipation of an economic downturn. While we don’t know exactly when it will happen, and we don’t know how severe it will be, a downturn is inevitable and we need to be ready for it. Grocery stores tend to be more recession-proof than other businesses — people got to eat! — but these are not normal times in the grocery biz.

The grocery industry is in a state of flux, with traditional grocers losing market share to deep discounters like Aldi and Lidl and to online retailers. In this rapidly changing marketplace, all grocers are seeking ways to differentiate themselves from the competition.

We believe that the Co-op is well-positioned to thrive as the industry evolves. Our exceptional prepared foods, large bulk departments, and emphasis on locally grown and produced foods all help to set us apart from our competitors.

Beyond these differentiators is the power of our cooperative ownership model. As consumer-owners, we all have a personally vested interest in supporting the stores through our patronage.

Recent sales trends validate our confidence. For the first four months of our current fiscal year (FY2020, which began on July 1), sales have been up in all three stores: 4.49% above prior year in Mt. Airy; 2.30% in Chestnut Hill, and 8.72% in Ambler.

Compare that growth with the industry, where most stores have sales that are flat, declining, or only marginally above prior year (Amazon just reported that last quarter its brick-and-mortar store division — mostly Whole Foods Market — experienced a 1% decline in sales from prior year).

Overall, the Co-op’s fiscal house is sound, the business is performing well, and we should be bullish about our future.

Thank you for your ongoing support and patronage of Weavers Way.