Kenney’s Decree Makes it Official: Co-ops Are a Boon to the City | Weavers Way Co-op
Skip to main content

Kenney’s Decree Makes it Official: Co-ops Are a Boon to the City 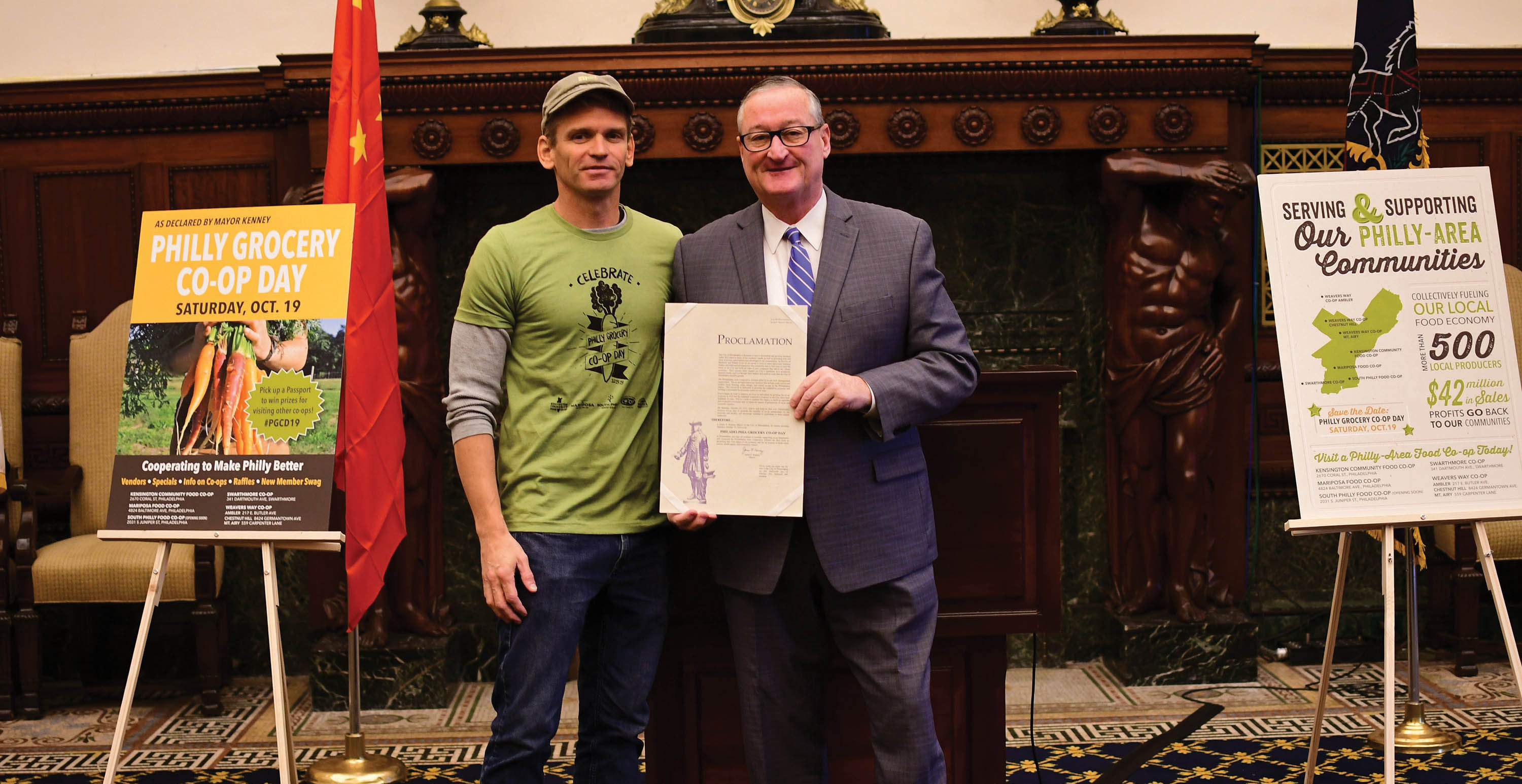 The proclamation ceremony for Philly Grocery Co-op Day in City Hall on Oct. 18 was an understated affair — no fighter jets soaring overhead, no costumed mascots by the podium. The Mayor’s Reception Room didn’t suddenly go dark to signal it was time to get started. Weavers Way General Manager Jon Roesser had everyone take a seat and then laid out the backstory for Mayor Jim Kenney’s announcement.

“Combined, we provide a critical link between over 500 farmers and food producers and customers of our community-owned food markets,” he said, referring to the other area food co-ops that were present — Kensington Food Co-op, Swarthmore Co-op, Mariposa Co-op in West Philadelphia, and South Philly Food Co-op, which is currently under construction.

“Because we are owned by our members — the folks who live in our neighborhoods and shop in our stores every day — each co-op is a reflection of the community it serves,” Roesser continued. “It’s why every neighborhood should own its own grocery store.”

Kenney thanked the co-ops for choosing to do business in the area and bringing healthy foods from local producers to the city’s residents. “Philadelphia has the most thriving cooperative [movement] in the country…and all that is because of your continued investment in our city. The cooperative economy provides opportunities for diverse communities to own a community-based business, providing opportunities for people to get involved…and repair…generations of racial and economic injustice.”

State Rep. Chris Rabb, a Co-op member in whose district the Mt. Airy and Chestnut Hill stores are situated, reinforced Roesser’s comments about how co-ops contribute to community wealth building. “We’re talking about tens of millions of dollars,” he said. “We’re talking about good, family-sustaining jobs in and for the city….This is a great day, and this is really the culmination for me of why I serve.”

Annette Griffin, board president of the Philadelphia Area Cooperative Alliance, touched on the city’s long history of hosting and supporting cooperative businesses, and she credited the area’s food co-ops with helping other co-ops get off the ground. “They have modeled for us, time and again, our practice of Principle 6 of the International Cooperative Principles: Cooperation Among Cooperatives,” she said.

“We’re really excited to be part of the growing cooperative food economy here in Philadelphia and to be& able to provide our community with access to local healthy food, provide jobs to the local neighborhoods, and really try to be a welcoming space for a very challenging part of the city,” Richards said. “I really am excited to be here and be part of this journey.”