Noreen Bids Farewell to the Co-op after 40 Sweet Years 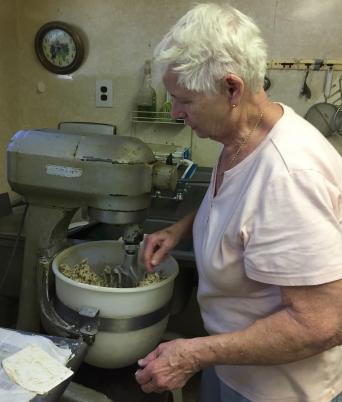 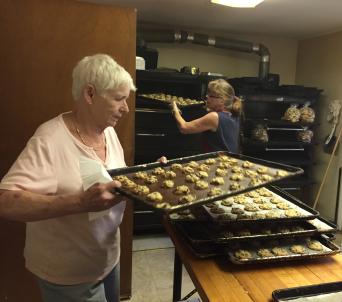 Laurie T. Conrad photo
Top: Hard at work in 2017; Bottom: Noreen preps trays while assistant Lynda Hugget loads the ovens. She and her husband were early members of the Co-op.

Noreen’s relationship with the Co-op goes back to its inception in 1973. She and her husband, Seymour, lived in Ambler but joined Weavers Way early on and became one of the Co-op’s original investors. Around the same time, she began selling loaf cakes to the store, in part to avoid working an office job.

“I enjoyed the baking and didn’t enjoy that much being a secretary,” she recalled.

Her cakes sold so well that she soon branched out into cookies and dessert bars. In addition to the Co-op, she supplied her creations to specialty shops, farm markets, and the Women’s Exchange of Chestnut Hill.

Eventually, she installed a commercial kitchen in her then-new home in Glenside. Over the years she brought on assistants but never completely gave up being a hands-on baker.

Noreen’s attention to detail resulted in consistency in the quality of her products. Staff considered her a perfectionist who had a lot of integrity and cared deeply about her product. She delivered her baked goods herself and on time.

“When it says “Noreen’s Cookies,’ it literally means Noreen’s cookies,” said Jenna Swartz, bakery buyer for Weavers Way Mt. Airy. “She’s very dedicated and every week we would have her cookies same time, same day, so there was no question on that.”

Kristina Walker, bakery buyer for Weavers Way Chestnut Hill, agreed.” She would say, ‘My name is on this, so I care about the product I’m giving you,’” Kris said. “She really took pride in what she did.”

Noreen is a self-taught baker who would often bake for her family. At one point, she took a cake decorating class, which she enjoyed, but only shared those creations with family.

With her family grown and Seymour gone, Noreen is adjusting to retirement and the prospect of slowing down. She lives with her two rescue cats, Peter and Maggie, and gets regular visits from fellow members of her local senior center. Housework has become something of a challenge for her.

She believes that confidence has a lot to do with a person’s baking ability. Her advice to those who doubt their ability is to “stop shooting yourself down” and to not allow the opinions of others to discourage them.

“You’re better than that,” she said. “You follow the recipe.”