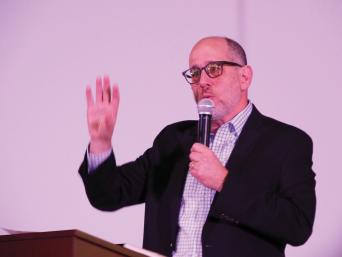 An upbeat Jon Roesser began the Weavers Way Co-op fall membership meeting Oct. 27 at the Waldorf School of Philadelphia in Germantown by reporting “overall a really, solid year” for fiscal 2019, which ended June 30.

Roesser, the Co-op’s general manager, said Weavers Way hit $30 million in revenues for the first time, thanks largely to the two-year-old Ambler store, but that Mt. Airy and Chestnut Hill stores also saw increases in sales. He added that the Co-op’s stores are doing better than the grocery store industry, which he said is experiencing flat revenues.

But he warned the estimated 130 members in attendance that competition facing the stores “will continue to be ferocious” with pressure from online grocery sales. (More of Roesser’s fiscal report can be found in his column.)

The success of the Co-op and how it leverages member dollars is cited in a new book and was the topic of a presentation by financial advisor and Co-op member Mark A. Pinsky. Along with Amalgamated Bank CEO Keith Mestrich, Pinsky authored “Organized Money: How Progressives Can Leverage the Financial System to Work for Them, Not Against Them,” which was released early last month.

Pinsky said progressives need to stop ceding control of their money to conservatives.

“The financial system is not working for progressives,” he said, “because progressives are handing money over to conservatives,” in essence, funding the opposition.

Pinsky defined progressives as “anyone who is to the left of the far right.”

In “Organized Money,” Pinsky and Mestrich say progressives can take control of their own money with financial institutions such as public banks, and credit systems that don’t rely on big bank credit cards, such as the Co-op’s Easy Pay program.

“The money comes into the Co-op economy, and does not go into the conservative institution’s economy,” he said. “That’s leverage — what we call money muscle.”

Pinsky is telling the Co-op story to audiences around the country through his book and appearances, including presentations to sustainable investment groups. “Organized Money” is available at Big Blue Marble Bookstore in Mt. Airy and other outlets.

Representatives of the Co-op’s new discount committee took the stage for a few minutes to explain how they will be assessing the Co-op’s various discount programs in the coming months. Look for their surveys and notices about member meetings in December and January.

The evening ended on a sweet note: generous slices of rich, moist chocolate cake, along with a presentation by Paul Cantagallo, co-founder of Eat Nice Foods, which bills itself as “plant-based comfort food.”

Cantagallo credits the Co-op for “giving local vendors opportunities to break in to area grocery stores.” He said without Weavers Way, vendors like Eat Nice face difficult obstacles and competition that prevent them from growing their businesses. Eat Nice’s two varieties of filled vegan pasta can be found in all three Co-op locations.