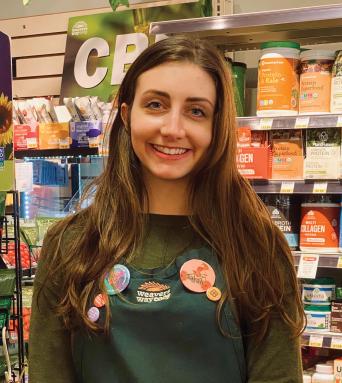 Job: Wellness manager, Across the Way

Where she’s from and lives now: She lived in Atlanta, Texas, and Wisconsin before moving to Bucks County and finishing high school at Council Rock North in 2009. She now lives in East Falls.

How she got to the Co-op: She started working in wellness at the now-closed Big Bear Natural Foods in Morrisville. She moved on to Organnons Natural Market in Newtown, where she was their wellness manager. After she moved to East Falls with her then-boyfriend in April of last year, she got tired of the hour-long commute and applied for the opening at ATW.

Academic endeavors: She has three online classes left through Penn State before she graduates with her bachelor’s in neuropsychology. She hopes to join the Peace Corps at some point and then continue her schooling, possibly including med school.

Future plans: She hopes to join the Peace Corps at some point and then continue her schooling, possibly including med school.

Thoughts on the job: “I really like it. I’m very appreciative that I can still be on the floor and talk to customers because that’s one of my favorite things — helping people.”

Thoughts on the Co-op: “I love it….I have one member who’s coming in and bringing me their homemade fire cider tonic because…they heard that I’m sick…that doesn’t happen elsewhere. It’s such a family.”