COVID-19 Turned the Animal World Upside Down, Too

by
Brenda Malinics, for the Shuttle 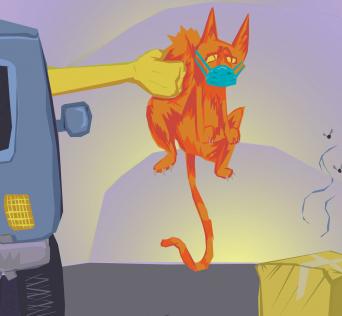 Illustration by Ariel Dinero, Weavers Way Across the Way Staff

Daily we hear about how COVID-19 is impacting our health, our economy and our daily way of living. But its fallout has also taken a toll on our domestic and wild animals.

I founded Brenda’s Cat Rescue, a small 501(c)(3) nonprofit run by volunteers and located in Northwest Philadelphia. Since March, when we had to close our adoption center at the Plymouth Meeting PetSmart, our average working day has doubled. We are busier than ever — manning phones, answering emails, vetting applications, problem solving, arranging adoptions and doing hands-on cat care seven days a week.

In March, the Department of Agriculture banned all spay/neuter surgeries. The beginning of spring is also the beginning of kitten season, so this mandate was received with shock and disbelief. It affected low-cost sterilization clinics as well as private vets. Some medical professionals communicated that they felt the rationale was to preserve the limited supply of personal protective equipment in the United States, while others thought that it was done to preserve the drug supply, since some of the same drugs that are used on animals during surgeries are also used on humans.

Whatever the reasoning, it meant that all the pregnant stray female cats could not be aborted and spayed and that there would soon be an explosion of kittens. Females can go into heat while still nursing, so there would be repeated numbers of litters born over the summer by the same female. And females as young as four months can get pregnant.

We had to rewrite our adoption policies and invent creative, workable ways to achieve non-contact “meet and greets” as well as finalize adoptions, since no one could be allowed into our foster homes. And because people were suddenly quarantined, our foster and adoption inquiries dramatically increased. Although there were many celebrated media reports of shelters being emptied, many shelters and rescues were concerned for the animals’ futures when quarantine was over and people went back to work.

Due to job loss and financial hits, many animals were simply abandoned. The number of calls and emails BCR received daily from desperate people asking for food and help were staggering and gut-wrenching. We also received numerous calls about people going into the hospital and unable to care for their pets, and/or from people who wanted to establish contingency plans should they get sick and need to be hospitalized.

Calls increased daily from people finding pregnant cats or moms with litters in yards, under sheds, decks, patio furniture, window wells, etc. Frustration levels ran high on both ends of the phone because we had no solid resources to provide.

Wild animals lost any avenues of help when wildlife rehab clinics also closed. Spring is baby season for wild animals, so all those baby birds, bunnies, mammals and reptiles in need would perish, along with any sick or injured adults.

Scientists have labeled COVID-19 as a Zoonotic disease, suspecting that it jumped from animals to humans in China. But the wild animals associated with it were taken from their natural habitat and brought to “wet markets” where they were slaughtered for human consumption in unsanitary and unnatural conditions.

Our pets cannot pass COVID-19 to us humans, but humans can transmit the virus to animals, as proven at the Bronx Zoo, when several tigers caught the disease from their human caretaker. Animals can also get sick from other animals who are infected with the disease. So if a person got infected with COVID-19, their pets would have to be quarantined from other similar species for two weeks, just as an exposed human would have to quarantine themselves.

The Department of Agriculture lifted its spay/neuter ban recently, but the dreaded explosion of kittens has occurred. Some wildlife rehab centers have reopened with non-contact admissions and some spay/neuter clinics have resumed operations, but as soon as a staff person comes down with COVID-19, it must close and quarantine.

BCR is planning to showcase some of our cats on weekends only at our adoption center at the Plymouth Meeting PetSmart starting in July, but it will not be business as usual. No one knows when life will resemble the good old days, without masks and without fear. Until that time comes, please give our animals a helping hand. Put out water bowls (empty them daily so you don’t breed mosquitoes), provide food for momma cats and/or kittens, and keep trying to get them off the street.

If each person assumes some responsibility to help an animal in need, it will have a huge impact, especially for that animal. Please know that they are struggling to survive, just like humans.