by
Laura Young, for the Shuttle 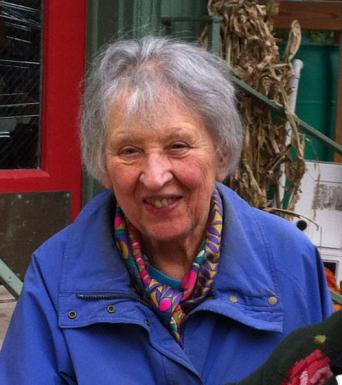 Vivian Schatz, a founding member of Weavers Way Co-op, died June 16 at her home in Mt. Airy of complications from dementia. She was 95.

Vivian is survived by two daughters, Linda Schatz and Diane Klein, and four grandchildren. Her husband, Albert, who discovered the antibiotic streptomycin, died in 2005.

Vivian had a profound influence on the Co-op beyond her many years of service as a board member and head of the Education Committee. A pioneer in environmental advocacy, she was instrumental in moving the Co-op toward greater awareness of its environmental impact, both locally and beyond.

“Vivian was clearly one of the members who cared about not only the Co-op but also about our role in educating the community on environmental issues…,” said Glenn Bergman, the Co-op’s general manager from 2004-2015. “She wanted to make sure that I knew that our actions are important, that we should be aware of the issues, and that we should act.”

“Vivian was an outspoken supporter of the United Farm Workers’ grape boycott and other consumer boycotts, as well as early Weavers Way environmental efforts,” he said. “She was also an outspoken advocate for fair treatment of our staff and the people in the world that produce our food.”

In addition to environmental activism, Vivian worked all her life for peace and social justice. A frequent presence at demonstrations and a prolific letter writer, she advocated for nuclear disarmament and civil rights and in support of the poor and marginalized. She often held leadership roles at local organizations, including the Nuclear Freeze Campaign and the Women’s International League for Peace and Freedom, which honored her with its Peace and Justice Dove Award in 2017.

“One of my mother’s core concerns was the imbalance in how people are treated,” her daughter Diane said. “It was important to her that everyone be treated equally and fairly.”

Born in Philadelphia, Vivian grew up in northern New Jersey. Vivian earned a science degree from New Jersey College for Women (now Douglass Residential College, part of Rutgers University) as well as a master’s degree in biology from Drexel University and a second master’s in medical biochemistry from the University of Pennsylvania.

In 1962, Vivian and her family moved to Chile, where she was named acting director of Colegio Nido de Aguilas, a bilingual K-12 school. After returning to Philadelphia in 1969, she was hired as a junior high school science teacher. Her passion for nature enriched her classes at the Crefeld School, William Penn Charter School and what is now Springside Chestnut Hill Academy. She also consulted for the School District of Philadelphia, showing teachers how to use elements from nature to provide hands-on science lessons for pupils.

“What is most important to me about my mom,” her daughter Linda said, “was her keen eye for beauty, her appreciation and care for nature, her passion for life and determination to make the world a better place for all.”

A memorial for Vivian took place via Zoom on July 26.

Donations in Vivian’s memory can be made to All Together Now Pennsylvania (alltogethernowpa.org) and the Environmental Defense Fund Monarch Butterfly Restoration Project (www.edf.org/monarcheffect).