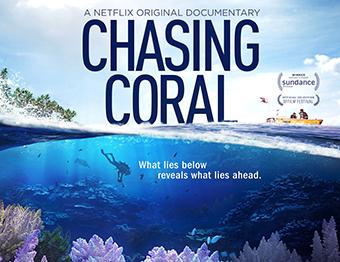 “Chasing Coral,” a Nextflix Original, is the festival’s opening night main attraction. It follows a team of divers, photographers and scientists as they set out to document why and how coral reefs are dying on a massive scale.

The festival opens with the Pennsylvania premiere of “Anote’s Ark,” directed by Matthieu Rytz, straight from its Sundance 2018 World Premiere. The opening night feature showcases Jeff Orlowski’s “Chasing Coral,” winner of the Sundance Film Festival Audience Favorite Award. Orlowski will talk with the audience after the film.

The festival closes on April 8 with the Pennsylvania premiere of Karina Holden’s provocative journey into the ocean realm, “Blue.” The festival will feature dozens of new shorts and features from international and American filmmakers to kick off Earth Month.

“This festival comes at a critical time in our country and the world, with the health of our environment at stake,” Goldstein said. “We hope to bring the planet to Philadelphia through films that entertain, inform, and inspire personal action.”

Last April’s inaugural festival showed 22 outstanding shorts and feature films, brought in 11 film directors from around the country for post-screening Q&As and sold out on Opening Night, with a line around the block!

The 2018 event promises to be even bigger and better. The Juror Panel reviewed 250 films from 43 countries to select a three-day program of 25 shorts and nine feature films. (See the entire lineup at philaenvirofilmfest.org.) “The caliber of programming from around the world that we’re offering at the upcoming festival is tremendous,” said Artistic Director Alexandra Drobac Diagne. “We are hosting Pennsylvania Premieres for eight of the nine features.”

Most films are followed by Q&A sessions with the directors.

The Nature Conservancy and Media, PA-based Natural Lands Trust are the festival ‘s lead sponsors, and Saint-Gobain is presenting the Kids’ Planet and Regional Film programs. Weavers Way Co-op is supporting as a Community Partner.

Single tickets are $12, and Weavers Way members can use the promo code GREEN2018 to purchase discounted tickets for $10 on the festival website: philaenvirofilmfest.org. Weekend passes are $35. Students with ID can pay $5 at the Box Office at the Prince, 1412 Chestnut St.