At Last, Sensible Districts for PA 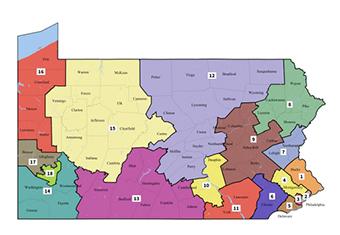 by Sue Wasserkrug, for the Shuttle

The drawing of congressional districts has been in the news a lot lately, and now Pennsylvania has new ones.

As a result of a lawsuit brought by the League of Women Voters of Pennsylvania last fall, the Pennsylvania Supreme Court struck down the state’s map of congressional districts as unconstitutional. Last month, the U.S. Supreme Court confirmed the state court’s new map.

The state court struck down the old map as an illegal partisan gerrymander that therefore violated the the Free and Equal Elections Clause of the Pennsylvania Constitution. (The case is called League of Women Voters of Pennsylvania v. Commonwealth of Pennsylvania, if you want to look it up.) In plainer English, the court said Pennsylvania’s congressional districts were drawn in a way that made it impossible for all votes to count. You may recall that the last districting, in 2011, led to a situation where Republicans held 13 of Pennsylvania’s 18 seats in Congress, despite the fact that they won less than half of the votes statewide.

The state court’s January order directed the GOP-led Pennsylvania legislature to redraw the districts by Feb. 9, based on “neutral criteria of compactness, contiguity, minimization of the division of political subdivisions, and maintenance of population equality among congressional districts.” (If you’ve seen the 2011 map, you know it didn’t adhere to those criteria.) Feb. 9 came and went, and the General Assembly failed to submit a new map. So the state Supreme Court issued its own, an action that was upheld by the U.S. Supreme Court.

What an improvement! Click here or on the map image to see the details.

One thing a lot of people don’t realize is that this new, improved map isn’t permanent. Nor should it be — districts are supposed to redrawn every 10 years after the U.S. Census to reflect population shifts. Different states have different rules for exactly how districts are determined, so it’s possible that, without a change in the process of drawing the map, we’ll see backsliding in Pennsylvania in the next round following the 2020 Census.

Fair Districts PA would like to keep that from happening. FDPA is a nonpartisan statewide organization advocating for a change in the process, specifically, the creation of an independent, impartial, transparent and ethically bound commission to update district maps every 10 years. Five states — Alaska, Arizona, California, Idaho, Montana and Washington — currently have such commissions.

To learn more about FDPA’s efforts, strategies and successes, visit www.fairdistrictspa.com or follow FDPA on Facebook. If you want to see an end to partisan gerrymandering in Pennsylvania, getting involved with FDPA is a great first step.