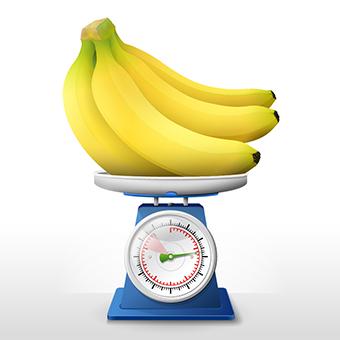 I’ve got bananas on my brain. Here’s why:

The Co-op’s bananas are imported by Equal Exchange, a worker cooperative that deals directly with small farmers in Ecuador and Peru. The bananas are both organic and Fair Trade-certified, and we’re proud to be part of the supply chain that brings them to you, our member-owners.

Problem is, our bananas are expensive. At 99 cents a pound, they are at the top of the market in terms of price. No one charges more for bananas than we do.

The typical banana weighs about a third of a pound, so to buy a banana that’s grown without pesticides by a farmer who’s paid a fair price, shipped in a climate-controlled container thousands of miles and then transported to our stores and stocked on the shelf will set you back about 33 cents.

A bargain, considering. Except bananas, like ground beef and half-gallons of milk, are considered particularly “price-sensitive.” Shoppers see bananas for 99 cents a pound and just assume we’re an expensive place to shop. Fair Trade and organic certifications aren’t going to get us a pass.

Our produce wholesaler has two potential solutions to our banana-sticker-shock quandary, both practical and both problematic.

Most retailers (including Whole Foods) offer both conventional and organic bananas. And Weavers Way has always offered conventional produce side by side with organic produce. Our product philosophy allows for the sale of good-quality conventional products to meet the diverse needs of our member-owners.

But there are compelling reasons to avoid conventional bananas. The banana industry has a long and brutal history of mistreating workers, including the misuse of child labor, and dousing their plantations with the most noxious of chemical pesticides. Workers often are exposed to these toxins.

Selling conventional bananas may be one compromise too many — risking our reputation, undermining our brand and selling our soul to be competitive.

Our produce wholesaler’s second proposed solution is to stick with selling just the Fair Trade, organic bananas, but lower the price to 79 cents, taking a smaller profit, which would better align our pricing with the marketplace.

The problem with this solution is that bananas are big business: Last year, we sold $203,089 worth. Reducing the price to 79 cents a pound would mean we’d sell more bananas, but whether we’d sell enough to make up the margin loss is an open question. That would only work if a large number of our existing customers are currently buying their bananas elsewhere (at least some of the time) and would change their buying habits if our bananas were suddenly 20 percent cheaper than before.

Otherwise, if we took bananas from 99 cents to 79 cents, we’d need to make up the difference somewhere else in the produce department, raising prices on items that are less price-sensitive.

This mixed-margin approach is generally accepted in the retail world. And as consumers, we sort of know and accept this: Fast-food joints can sell a hamburger for 99 cents because there’s another product with a bigger markup to cover it.

As a cooperative enterprise, Weavers Way has always tried to maintain a certain level of transparency in pricing. Our goal is to mark up products basically just enough to cover the cost of running the operation.

But as member-owners, you expect us to operate our business to compete in the marketplace. You want us to be savvy retailers and that means that when we’re determining prices, we can’t ignore what our competitors are charging.

In fact, we’re already doing this with bananas. Were we to apply our standard markup, we’d be selling Fair Trade bananas for $1.27 a pound. But we keep the retail price below $1 a pound as it’s generally agreed that crossing the $1 threshold would turn off too many customers.

As member-owners of Weavers Way, you have already shown you care about fair treatment of workers and reducing the use of chemical pesticides. You also want the stores you own to stay in business.

We’re always trying to get that balance right.