We Celebrated the Earth and the Sun — Powerfully 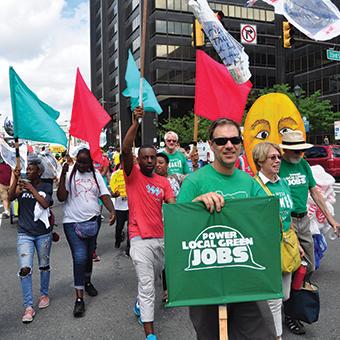 As members of Weavers Way and the organizing committee of the “Power for a Just Future” parade on Aug. 2 in Center City, we thank Weavers Way for being a co-sponsor of the event.

The parade celebrated the Earth, the sun and solar power. Specifically, we called on three of our major institutions — PECO, SEPTA and the City of Philadelphia — to meet their operating needs as soon as feasible with 100 percent solar power. This would both slow climate change and reduce traditional air pollution, both ways to improve the health of Philadelphia residents.

Moreover, we want PECO, SEPTA and the city of Philadelphia to use as much locally produced solar power as possible. In addition to improving public health, this would create local, well-paying jobs for solar installers right here in Philadelphia, a critical step for the country’s fourth-poorest city.

Our parade on Aug. 2 drew more than 250 participants and received coverage on local TV news, which helped carry our message to thousands more. For more information, email joybergey@gmail.com.