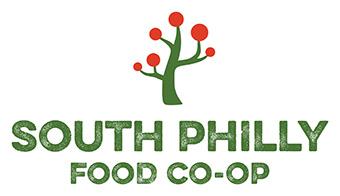 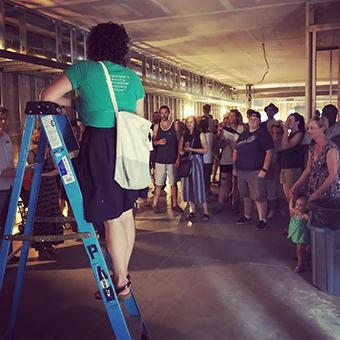 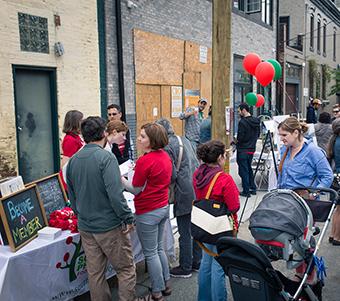 South Philly Food Co-op photos
Members have been able to grab sneak peeks of the space at 2031 S. Juniper as construction and fitting out has progressed over the summer. (That’s Co-op prez Leigh Goldenberg on the ladder.)

The South Philly Food Co-op has cleared another major hurdle on its way to opening its doors as the city’s newest community-owned, full-service grocery store.

“It’s pretty amazing to see the inside of the building and the walls framed out,” said Leigh Goldenberg, a member of the co-op’s Board of Directors and resident of the Passyunk Square neighborhood. “Walking in and seeing it makes it so much more real, and it was bigger than I expected.”

The South Philly Food Co-op has been in the works since 2010. It’s a long process to find, fund and fit out a new store. Just locating the optimal space took two years. The co-op selected a property at 2031 S. Juniper St. in the heart of South Philadelphia, near the intersection of three commercial corridors: Passyunk Avenue, Snyder Avenue and Broad Street. The lease was signed in November 2016, and work on the 3,300-square-foot retail space began with a lot of input from co-op members.

“The building was new construction,” Goldenberg said. “We had input about the construction before we signed the lease. This space is being built out for us, so that’s great. The co-op will still be responsible for the shelving.” The target for opening is Spring/Summer 2019.

The physical structure is one element of building a new co-op; signing up member-owners and raising equity from them is another. Member-owners are the true foundation of any co-op, contributing equity payments to the organization and even providing loans, especially in the beginning. The overall capital campaign for the South Philly Food Co-op is $1.14 million; they’re still looking to raise about $190,000 in member loans.

“We have 919 member-owners,” said South Philly Food Co-op Board President Jessica Calter, who lives in the Dickinson Square West area. “We are aiming for 1,200 members to raise the equity we need.”

Each member makes a one-time equity investment of $200. The amount and the co-op concept of member-ownership can be a challenging sell, so there is a constant effort to educate prospective members about why they are putting in money that doesn’t go directly to buy groceries.

The co-op board is also sensitive to the immigrant communities in South Philadelphia, one of the most diverse neighborhoods in the city.

“About a year ago, we instituted the Food Justice Equity Committee to reach out to community organizations and ethnic communities, to find out how the co-op can best serve these folks and how we can best serve the community,” Goldenberg said. “We have to constantly message why this is important to our neighborhood.” She said some of the co-op’s handouts and signage have been translated into Spanish, but admits other materials in other languages will be needed.

Calter says the ethnic diversity in the neighborhood is both a challenge and an opportunity. Take building equity. “I think it’s something that takes time and what we’ve seen is that it takes more education because it’s a slightly different investment opportunity than people are used to. It requires a little more education so people understand how it works. But it’s been really positive for our members and the community. It has deepened the financial investment and engagement with our members in their community, and also is bringing the community together with the commonality of the same goal for everyone.”

South Philly Food Co-op members are benefiting from the experience of others who have established community grocery stores in Philadelphia and elsewhere, Calter said.

“In addition to working with the Philadelphia Area Cooperative Alliance, Weavers Way, Mariposa and others, we have forged relationships with co-ops in Chicago and New Orleans, for example, because an urban co-op is a little different from most co-op communities and their input is very helpful.”

They have also forged a strong relationship with the Kensington Community Food Co-op, which is following a similar path in its effort to start a cooperative community grocery store, albeit in a neighborhood about 7 miles to the northeast. Renovation at KCFC commenced in April 2018 and the store at Frankford and Lehigh avenues is now slated to open later this year.

“The principal of co-ops helping co-ops is absolutely true,” Goldenberg said. “We’re very plugged in to the co-op community.”

With the interior framing completed, the owner of the building is working on the plumbing, electricity and the heating and air conditioning system. Now the board is preparing for another big step: hiring a general manager.

“We haven’t finalized our staffing needs and ultimately the GM will decide, but we anticipate hiring 10 full-time staffers and 15 to 20 part-timers,” Calter said.

“We are committed to hiring people from the neighborhood,” Goldenberg said, “and hiring people who speak different languages so people can feel comfortable coming into the store.”

You can learn more about the South Philly Food Co-op on their Facebook page or on their website, www.southphillyfoodcoop.org.