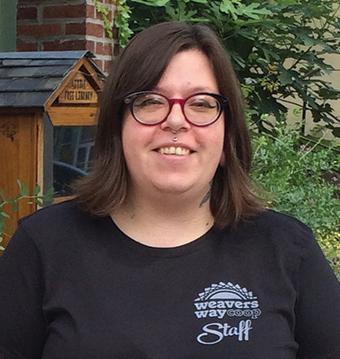 Where she’s from/where she lives now: Houston/Chalfont, with her boyfriend, Anthony.

A little background: She enrolled at Kutztown University in 2008 as a transfer from the University of Houston, majoring in art therapy. She left school two years later and moved to Allentown, but visits to a friend in Philly persuaded her to move here in 2010. She worked at a Starbucks in Center City, then left in 2014 for Orlando, FL. She returned to the Philadelphia area in February 2016.

How she got to the Co-op: She was working at a coffee shop in Bryn Mawr, but felt she needed a fresh start. Her best friend, former Ambler Bakery and Pet Supplies Buyer Jon Cavanaugh, encouraged her to apply. She originally interviewed for a position in Chestnut Hill, but ended up in Mt. Airy.

Thoughts on the job: “I wish I could have a little more one-on-one with everyone…I know how it is to be new somewhere. …People get so frazzled so quick, especially because we’re so cramped. And I tell people, ‘That’s really a blessing.’“

A little Co-op love: “It’s nice to see people who are very committed, who have low, low member numbers and have been here 20-something years. That resonates a lot with me, since I’ve been all over the place. It’s a good testimony — if you just really do try, and you have good intentions, and you have a little bit of faith from people around you, what you can accomplish.”