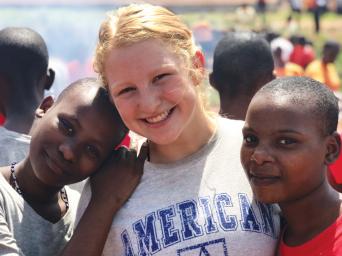 Ilsa Maguire, 15, of Ambler, wants your bras. She also wants to raise your awareness of impoverished girls her age in Uganda. Last year, she collected 900 new and gently used bras for Ugandan teens. This year, her goal is 1,000.

“Secondary education is not mandatory in Uganda, and it isn’t free,” Ilsa said. “Families struggle to provide basic needs.”

In a country where half the population exists on less than two dollars per day, a bra is a luxury. But for a teenage girl, especially one who wants to participate in sports, it’s a necessity. This isn’t lost on Ilsa, a strawberry blonde sophomore who plays basketball and is a member of the crew team at Mount St. Joseph Academy in Flourtown. So, in 2018, she organized a bra drive at her school.

“Sports bras and training bras were appreciated, but we welcomed any bra you no longer wanted, any size, any style,” Ilsa said.

Ilsa’s concern for Ugandan teens was inspired by her mother, Jennifer Ann Ehinger, who raises funds for two non-profits that serve the needs of impoverished children in Africa: Cameroon Football Development Program and Building a Bridge to Uganda, which coordinated the annual bra drive.

Last year, Ilsa collected 300 bras from fellow students and another 600 from friends and family. In August, she accompanied her mother and 13-year-old brother on a trip to Uganda to distribute 600 bras to students at Pope John Paul II High School, a Catholic school in a district called Luwero. The teenage recipients were so excited to receive them that many slipped the bras on right over their school uniform.

“I immediately fell in love with their generosity and hospitality,” Ilsa said. “Despite having so little, they welcomed us with open arms. They were all very curious about American life and excited to meet us. I was amazed at how hard they worked on their academics. They have a real understanding of how blessed they are to be at their school. They don’t take it for granted.”

Ilsa’s mother was moved by her daughter’s quick embrace of the Ugandan teens. “She slept in their dorms, danced with them, went to class with them and learned first-hand about their families and personal lives,” Ehinger said. “She saw herself in them and wants them to have the same opportunities as she has.”

The many miles between haven’t stopped the new friendships — Ilsa continues to hear from her Ugandan friends via Facebook. “They always greet me with ‘Hello, dear’ or ‘I miss you,’” she said.

Many high schools in Africa are boarding schools, requiring students to live away from home and pay fees for their living expenses and tuition. Research has shown that providing African girls with education helps break the cycle of poverty. Girls who go to school are more likely to enter the work force, earn higher incomes, delay marriage, plan their families and seek an education for their own children.

To promote her bra drive this year, Ilsa posted about the event on social media and hung posters at her school. Going forward, she’s working on a video about the girls she met in Uganda that explains how urgently they need our help.

“Ilsa has an amazing ability to inspire and rally others,” her mother said. “She is bold and loud and funny and outcome-oriented. When you combine that with her tremendous empathy, she truly has the ability to change the world.”

In addition to collecting bras, this year Ilsa will sell beaded African bracelets at her school to benefit the education of young women in Paga, a village in Ghana. The bracelets are the brain-child of Nafisa Adams, a 32-year-old Ghanaian entrepreneur who recently visited Mount St. Joseph Academy and shared her story. When she was 15, Nafisa escaped being a child bride to a man four times her age. Against the odds, she managed to receive an education and attended the University of Ghana. Making jewelry started as a way to help pay for her college tuition and eventually helped her launch a cooperative named Detiina (“Our Hope”) that supports the education of girls in her village.

“Many girls in Africa marry young, get pregnant and are stuck in poverty. Education provides a way out,” said Ilsa, who looks forward to returning to Uganda with her mother in July 2019 to again distribute bras. “I definitely want to continue to help people.”

“Right now, Ilsa is making life a little easier and much brighter for her sisters at Pope John Paul II in Uganda,” Ehinger said. “I could not be prouder of her and her schoolmates.”