Maura’s Moving On, But Leaving FOW in Capable Hands 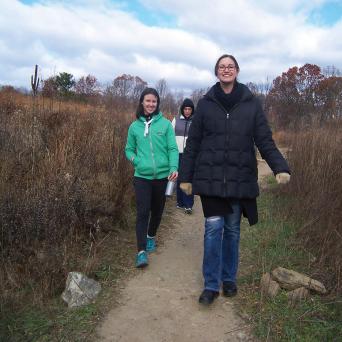 On the third Friday of every month for the past three years, I led Executive Director hikes in the Wissahickon. I became “Maura the Explorer” as I guided visitors through the woods, talking about what they were seeing and pointing out recent improvements that Friends of the Wissahickon had made to the area. I started doing these hikes because, after spending so much time in the office, I missed being outdoors, and I loved exploring and sharing our wonderful park with people who loved it as much as I did.

These memories are among the many reasons that deciding to step down as Friends of the Wissahickon’s executive director to assume the same position at Fairmount Park Conservancy was so difficult. But my decision to make this move was made easier by the fact the Conservancy’s work overlaps so strongly with the mission and values of this community that I respect and admire. And my new role will enable me to continue working with FOW on an even greater scale, while expanding the work I’ve been doing for the past 13 years on a citywide scale.

I am grateful to the Weavers Way community for recognizing the value of the tremendous natural resource we have in our own backyard and for putting their heart and soul – and their hands and backs! – into sustaining it. It’s like there’s a huge Venn diagram overlap between FOW and Co-op members, and an even bigger one of the value systems between these two groups.

Seeing through our true era of partnership with the city, getting a signage system installed in the Wissahickon, embedding the values of watershed stewardship in the community at large are all projects I had only hoped to accomplish. But the strong association with friends like Weavers Way helped make them a reality. I will personally continue to support the fine work at the Co-op, and I know that our partnership will continue into the future.

I am thrilled to be able to pass on the executive director baton to my friend and colleague Ruffian Tittmann, FOW’s deputy director since 2017. She joined FOW in 2006 as development director, just a year after I started, and we have worked hand in glove on all of our major Wissahickon Valley Park improvement projects. So we won’t miss a beat in the transition of leadership and continuation of FOW’s work, which is especially important as we look to our century of service in 2024.

Ruffian shares my love for our urban wilderness and watershed, and is more than ready to continue engaging the community in FOW’s stewardship. I cannot think of anyone better suited for and qualified to assume this role. Stay tuned for her columns in future issues of the Shuttle.

Happy holidays and a healthy New Year. See you in the Wissahickon.