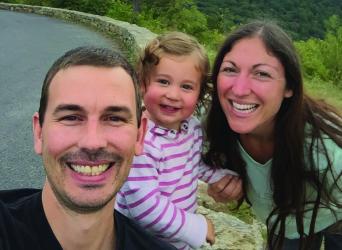 Current jobs: Nathan works in vendor management for JP Morgan Chase. Heather teaches Baby & Me yoga classes in Roxborough and Lower Merion. (They have a 2-year old daughter, Lina (pictured), and a baby on the way.)

Why they joined: Heather: “In San Diego, there were so many open-air farmers markets that were in walking distance, and lots of little health-food stores everywhere . . . so when we came here, we were like, ‘Where’s all that? What’s going on?’ We joined so we can be part of that.” By the by, Heather’s mom, Peggy Richter, is a longtime Co-op member.

Why they became working members: “We like to be involved, and we have the belief that it does take a village. My husband really enjoys doing hands-on work . . . we wanted to get to know, Where’s our food coming from? How can I help?”

Co-op job history: In previous years, they were active with the Manayunk/Roxborough Co-op Initiative. Nathan has also done many of their hours at the farms.

Favorite Co-op products: They’re lovers of The Bulk. They also look for sales on organic fruit and veggies. Lina is a big fan of dolmas.

A little Co-op love: “It’s so homey. Every time I come, I see someone I know, or make a new friend. Lina can just walk around on her own in the store; I don’t have to hold her the whole time, because she feels comfortable.”