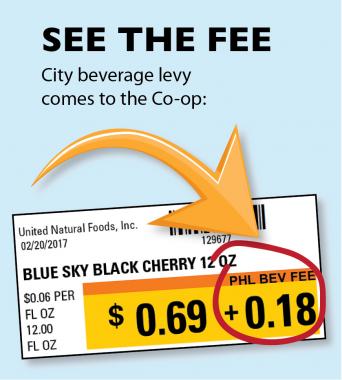 For a list of Co-op products affected by the city’s Sweetened Beverage Tax, visit
www.weaversway.coop/SBT-items

WANT TO READ IT FOR YOURSELF?
www.phillybevtax.com/Content/Documents/Philadelphia-Beverage-Tax-Regulat...

Both Weavers Way and Food Moxie supported this tax, testifying in favor of it during City Council hearings. Now it is time for the Co-op, a retail grocer, to implement our part of the program. This increases what shoppers pay for the beverages subject to the tax. For a variety of reasons, it took us some time to actually implement it, but by now the levy has been in place for a couple of weeks. Our point-of-sale system — that is, the cash registers — will add the amount of the tax to every item subject to the tax. New shelf tags have been created showing both the base price and the “fee” for that item — we chose the word “fee” instead of “tax” to differentiate it from existing state sales taxes. (You could make the case that the SBT is really an excise tax.)

The SBT-based fee is 1.5 cents per fluid ounce.

The SBT has ended up being a bit confusing because of the compromises needed to get it passed. Beverages covered under the law, in addition to the expected sodas and sports drinks, include almond, hemp, and cashew milk, some soy milks (but not certain fortified ones), some kombuchas but not others (depending on the wording of the ingredients) and diet drinks that contain stevia, aspartame or other artificial sweeteners.

We’re kind of figuring this out as we go, but it looks like we stock about 250 products subject to the tax.

While it’s very early in the game to predict outcomes, there is some initial evidence that increasing the price to shoppers of sweetened beverages does reduce consumption. However, there is not enough evidence to positively draw that conclusion yet, or tell whether it makes any difference in health outcomes. (Sweetened beverage consumption is associated with an increased risk of obesity, type 2 diabetes, heart disease and possibly heart failure, public health officials say.)

Other municipalities that have implemented a similar tax include Berkeley, CA (they were first, big surprise); Boulder, CO; Cook County, IL, which is to say Chicago; and three other California cities — San Francisco, Alameda and Oakland. Mexico passed a tax in 2014, implemented in 2015, and there seems to have been about a 10 percent drop in sweetened drink consumption. (Mexico also taxed high-calorie snack foods like potato chips.)

Mexico has among the highest diabetes rates in the Americas, with 14 percent of Mexican adults affected, according to the International Diabetes Federation, compared to 12 percent in the United States.

The United Kingdom also passed a similar tax but it doesn’t start until 2018.

r: (Nell) The brand we used to carry, Bar Harbor, was a little more expensive and didn’t sell as well, but you make a great point about carrying a U.S. product and I will try bringing this one back.

s: I just got my Shuttle and I read that the Ambler store is 11,000 square feet. So, with all that extra space, has anyone thought of putting in a year-round indoor dog park? I would place it near the deli and sampling stations, so that shy or less playful dogs could benefit from the positive associations built around food smells and/or scraps. Some of the newer Whole Foods on the West Coast have gone with this idea, and I understand it’s been a big hit.

r: (Norman) The Ambler Health Department will not allow live animals in the store. However, service dogs are allowed in. Turns out you can have an Emotional Service Dog, which you can train yourself, and if you find shopping at Weavers Way traumatic, as so many of us do, you may be able to bring your dog in to keep you calm. If a few shoppers do this at the same time, there’s your dog park. (The West Coast Whole Foods operations are not true dog parks, as they allow in cats too.)

s: “Low glycemic bread for diabetics. Alvarado Street Bakery. Can get at Acme, why not here?”

r: (Matt MA) Unfortunately, the low glycemic bread from Alvarado Street is not available from our regular suppliers.

s: “Would like to see unsweetened versions of Organic Valley Soy Milk & So Delicious Coconut Milk. Thanks.”

r: (Matt MA) While we do try to offer unsweetened options on products whenever possible, we are very limited on refrigerator space. However, since the Sweetened Beverage Tax is going to increase the price 96 cents on these half-gallons, we’ll see if we can figure out a way to stock the unsweetened varieties too.

s: “I love the artisan croissants available at Chestnut Hill. Any chance we get them in Mt. Airy? Thanks.”

r: (Matt MA) Unfortunately, due to our very limited shelf space for baked goods, we have not brought them in. We have been in talks with the supplier but just cannot make the space happen.

s: “Please order Better Than Bouillon No-Beef Base. Vegans want to have fun too.”

r: (Matt MA) The only meat-flavored vegan base our supplier carries from Better Than Bouillon is the No-Chicken base, which, while possibly not as fun as No-Beef, tastes pretty good.

s: “With global warming and all, how will food supply be affected?”

r: (Norman) Mainly, just as we have our own local farm, we’ll be able to have our own local ocean-raised seafood. We’ll even have staff fisher-people, so global warming will also help us fulfill our goal of providing more local jobs in a thriving, albeit warmer, local economy.