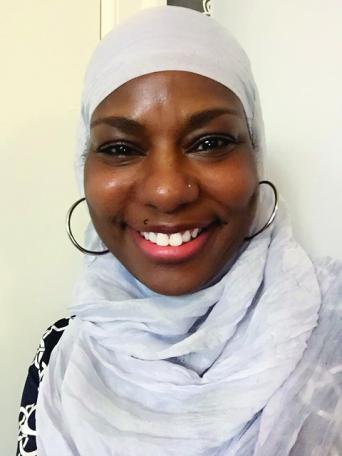 What’s that? She pays product and operational invoices, and also processes members’ checks.

Favorite parts of the job: Talking to vendors; giving employees reimbursement checks in a timely manner.

Lives in: Mt. Airy, with her husband, Faheem

Other family: A son, Jonathan (age 27) and a granddaughter, Lucy, age 8. She’s also the youngest of seven siblings, five of them girls.

How she got here: After going through a divorce, she returned to the area from Texas in 1995. She then worked in a nursing position at Thomas Jefferson University Hospital for six years, but had to leave for health reasons. She later got hired by Trader Joe’s and was eventually promoted to manager, but she found she couldn’t handle the number of hours required for the position. After taking some time off, she filled out an application at the Co-op, where she already shopped. She started as a cashier, moved on to cash reconciliation and then into the finance office, first as a fill-in, and finally on a permanent basis when Pat Arment retired in 2015.

Outside pursuits: She’s a personal trainer and a baker through her word-of-mouth business, Zahira’s Pastries. She puts a special emphasis on baking gluten-free desserts.

She struggles with: Her health. She was diagnosed with lupus at 18, and has had several starts and stops in her work life as a result. “I have battles . . . One of the biggest things for me is that I’m always [wondering if] I’m going to continue working. I used to be really shy about talking about it, but then, I realize that sometimes, I am sick, and instead of people thinking ‘What’s wrong with her today? that they would know.”

A little Co-op love: “The thing I like about it is that we are part-owners of it. I like to surround myself with people who are like me, care about the environment, and are really conscious about being a human being. A lot of people at the Co-op are like that. So it’s nice to be in a place that you would probably hang around anyway.”