Why I (get people to) Give: Stephanie Johnson | Weavers Way Co-op
Skip to main content

Why I (get people to) Give: Stephanie Johnson 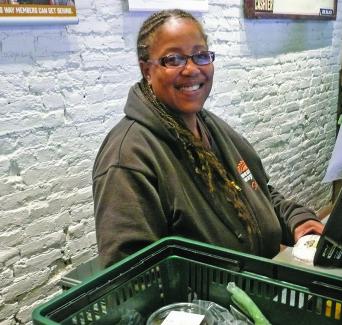 If you’ve ever shopped at the Weavers Way Mt. Airy store, chances are good you’ve met Stephanie Johnson. Often posted at the first register in the line, Stephanie offers a warm welcome to all who pass by, sprinkling terms of endearment upon shoppers, vendors and coworkers alike as she rings up items and sends people on their way. Stephanie personifies the sense of community for which the Co-op is known.

Just as she extends herself to shoppers, Stephanie also extends herself to Food Moxie, the Co-op’s affiliated nonprofit. This is particularly true on Giving Tuesdays, the second Tuesday of each month, when the Co-op fund-raises for Food Moxie at the registers. On these days, Stephanie announces to the whole line that it’s Giving Tuesday, letting folks know that when it’s their turn to pay, any bit they can donate to Food Moxie will be much appreciated. This really adds up: In 2016, Stephanie singlehandedly brought in $1,930.70 in Giving Tuesday donations to support Food Moxie’s farm, nutrition and culinary education programs.

“I support Giving Tuesday so enthusiastically because it’s work I believe in and that I’ve been involved with from the jump,” Stephanie explains. And indeed she has: Stephanie played a big role in the old Marketplace program, originally launched to engage C.W. Henry students who flocked to the Co-op after school. Later she helped make connections to Stenton Family Manor, where Food Moxie currently operates a half-acre garden along with programs for children, youth, teens and parents. As Stephanie puts it, “I helped make Food Moxie happen, and I love to usher it forward.” This doesn’t just manifest in her incredible fundraising, either — Stephanie is a steadfast champion of Food Moxie’s work, coming to events, sharing outreach materials with shoppers and more. In this way, Stephanie’s signature warmth spreads far beyond the checkout line, helping build a happier, healthier Philadelphia for us all.