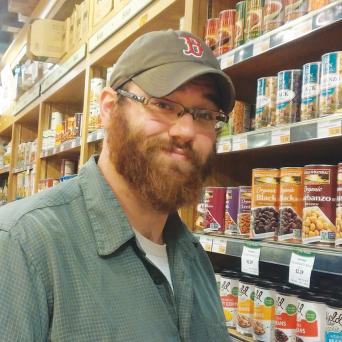 I took over as Grocery Manager at the Mt. Airy store in January. I’m originally from a village outside Syracuse with a population of about 1,000. My first attempt to leave rural New York was when I headed to Arcadia University to study English with the goal of eventually teaching. Fate had other plans, as the 2008 economic crisis made student loans incredibly difficult to procure. I returned to Upstate New York and worked assorted odd-jobs before landing at the local family-owned grocery store.

I enjoyed working under the management of the Farrugia brothers for three years, starting as a part-time stocker and rising to assistant store manager. Unfortunately, we were bought out by Tops, a Buffalo-based grocery chain. Restructuring and demotions followed but I stuck it out for the better part of a year until my fiancée announced that after graduation, she was planning to stay in Philadelphia. Miserable in my position within a soulless corporation and with the promise of annual attendance at an Eagles game, I began packing and job-hunting.

I started at Weavers Way nearly four years ago, within a week of our move to Mt. Airy. If you shop in the Mt. Airy store you’ve likely seen me handling just about any task on some occasion. While I’ve enjoyed the variety of experiences the Co-op has afforded me thus far, I’m excited to pursue this new phase of my career.

Outside my professional life, I’m happiest by a campfire with my now-wife, Kay, my dog and a good beer.