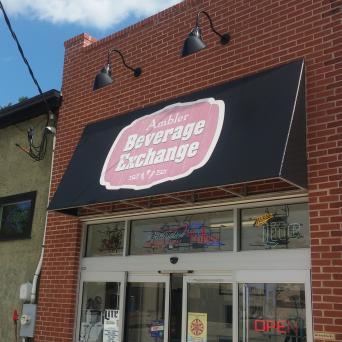 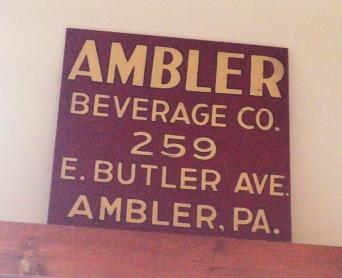 The current store, top, and the c. 1946 sign from the original Ambler Beverage Co.

When it comes to our new store in Ambler, which is about to open any minute, these are two of my favorite things:

In case you missed it, last year Pennsylvania changed the law that limited beer distributors to selling only cases and kegs. Now they can sell six-packs, singles, even growlers for off-premise consumption.

So, at the Ambler Beverage Exchange at 259 E. Butler Ave., you’ve got your craft beers, check. Suitcases of Bud and such, check that too. A four-tap growler system with a rotating cast of brews, double check.

And ice. While I’m talking to Ambler Beverage Exchange owner and proprietor Jim Carter, the ice guy sticks his head in and wants to know if he needs any 40-pound-bags. So when you go to the Co-op for groceries, not only can you pick up a sixer while you’re out, you can also pick up ice. Be still, my heart.

The building dates from 1946. Brothers Steve and Lou Mallozzi opened the Ambler Beverage Co. right after World War II, “when you could get structural steel again,” Jim said. It was always a drive-through — after WWII, you could gas the car up for beer runs again, too — until Amber Beverage Exchange shut the garage door. “The way the beer situation has changed — there’s so much variety now, you really want people to be able to shop, not just come in and say, ‘Give me a 30-pack of Coors Light, throw it in the trunk.’ . . . We want people to come and have a nice experience.”

And, he added, “We’ll carry your stuff to your car.”

The Mallozzis retired from the beer business in the ’80s. (“Lou is actually still alive. Steve died last year, he was 94. I heard he was bear-hunting up until a few months before,” Jim said.) The distributorship went through a couple of hands after that, then the last owner moved the business to East Norriton in 2006.

“I don’t know why they moved,” Jim said. “It was right before Ambler started to do its renaissance, the theater started to get renovated and everything happened.”

The building stood vacant for about five years — “I think when the dealership was next door, they used it for a detail shop,” Jim said, referring to the old Knopf Motors, where the Bottom Dollar eventually went up. “Ambler was just dying for a beer distributor.”

Jim, a beer-loving landscaper at the time (he still operates Sunrise Landscaping) and a partner, Doug Loughran (who left the business a few years ago), acquired a vacant license and opened the Ambler Beer Exchange in 2012.

How’s that turned out? “I love it. Ninety-five percent of the people who come in here are in a good mood — they have a party to go to, or they’re looking forward to cracking a beer,” Jim said. “It’s a ton of fun.”

Currently open 10 a.m.-8 p.m. Monday-Thursday, 9-9 Friday-Saturday and 11-5 Sunday, Jim plans to adjust the hours to align with the Co-op’s once it opens: “I am so looking forward to it.” 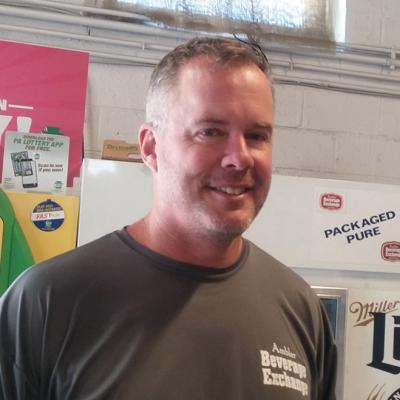 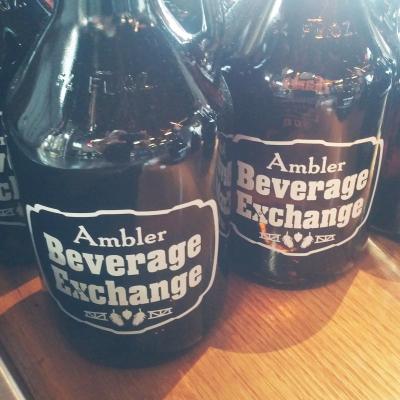 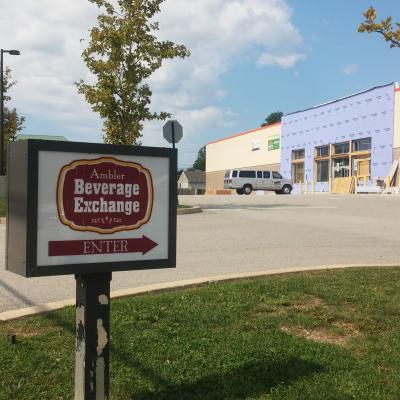 The beer business has changed since Jim Carter got into it in 2012, with beer distributors allowed to sell growlers.