GM's Corner: It Was Never About the Food | Weavers Way Co-op
Skip to main content

GM's Corner: It Was Never About the Food 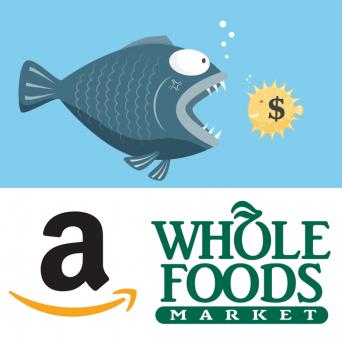 In case you haven’t heard, the grocery industry is in a tizzy over the news that Whole Foods, the company that took natural foods mainstream, has been purchased by Amazon, the company that changed the way Americans buy everything from books to baby diapers.

Oh, what changes this will bring!

Late last month, the feds OK’d the deal — already, and overwhelmingly, approved by Whole Foods shareholders — and since then the industry’s been in chaos.

Stocks of other publicly traded grocers, such as Albertsons (parent of Acme) and  Ahold-Delhaize (owner of Giant) and Kroger, have been in a tailspin. Grocery-industry experts are predicting the demise of the supermarket as we know it.

And to be sure, this Amazon / Whole Foods merger changes the grocery landscape, with winners (Amazon Prime customers) and losers (Whole Foods employees). Customers can certainly expect lower prices on Whole Foods shelves (they can’t get any higher).

But if you think this deal was about “making healthy and organic food affordable for everyone,” as Amazon said in a statement, or better positioning Whole Foods to “expand our efforts to support and promote local products and suppliers,” as John Mackey, CEO of Whole Foods, told investors, you are, I’m afraid, very much mistaken.

This deal was about greed.

Whole Foods, you see, has been struggling the last few years. Negative perception based on high prices, increased competition and a cumbersome management structure all contributed to slower sales and smaller profits.

Jana, a Wall Street hedge fund, is an “activist” investment firm: On behalf of its (very rich) clients, it buys a large portion of a distressed company’s stock, then harangues management into making changes that improve the company’s performance. Preferred tactics are layoffs, squeezing suppliers and closing underperforming locations.

In March, Jana spent $721 million to buy an 8.2 percent stake in Whole Foods. It immediately began to demand seats on the board and a dramatic change in strategy. Jana said it intended to address Whole Foods’ “chronic underperformance for shareholders.”

Most importantly, it stated its plans to force Whole Foods to explore “strategic alternatives” with “third parties.”

Jana’s activism did the trick. Investors flocked to Whole Foods stock. Its price increased dramatically. Rumors of a merger were rampant.

Amazon’s purchase of Whole Foods was announced in June. Less than a month later, Jana sold its stake. Mission accomplished. Their take on behalf of their clients: a cool $320 million. Not bad for a few months of, um, “work.”

Mackey, who for now remains CEO of Amazon’s Whole Foods division, founded the company in 1980. He’s a complicated guy, combining a deep concern for the planet with a fierce, defiant libertarianism. The company he founded and grew is certainly not perfect, but it has always maintained high standards for its products and has been instrumental in bringing terms like “organic,” “fair trade” and “sustainable” into the mainstream.

Whole Foods, in other words, has always been about more than just profit. Unlike, say, Jana Partners.

Whole Foods’ fate was actually sealed back in 1992, when it went public. Mackey needed venture capital to fuel his expansion plans. And as long as the business did well, investors were happy. But when things got rough, investors turned quick. And now Mackey gets to play second fiddle to Amazon’s Jeff Bezos.

Will Amazon allow Whole Foods to maintain its product standards? Perhaps. But Amazon is publicly traded too, and its investors’ demands will forever come first.

Over the summer, you can bet that in the clubs of Manhattan, on the decks of beach houses in the Hamptons and in the clubhouses of private golf courses in Florida, Jana Partners investors raised many a glass to toast their latest success.

But I am not despondent. Hanging out on the corner of Carpenter and Greene, or in The Backyard at our Chestnut Hill store, or on Butler Avenue in Ambler, I’m talking to more and more people who are opting into the cooperative economy, supporting local businesses and making deliberate choices about where to spend (and invest) their money.

Together we are proving that prosperity can be shared and that a cooperatively owned business can hold its own in the competitive marketplace.

And as owners, we can all take comfort in knowing that Weavers Way is most assuredly not for sale.