Gardening for the Bees

by
Howard Goldstein, for the Shuttle 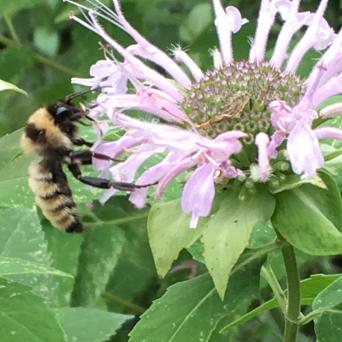 As a Penn State Master Gardener and volunteer at the award-winning pollinator garden at the Horticultural Center in West Fairmount Park, I have developed a deep affection for bumblebees.

North America has 40 species of native bumblebees. Honeybees are not native and there are only seven species of them. While honeybees convert pollen and nectar to honey, bumblebees combine pollen, nectar and saliva to feed their larvae. They also store pollen for those cool, rainy days when they remain in their nests.

From egg to full bumblebee adult is a cycle of four to five weeks, depending on the species. The egg stage lasts about five days; after the eggs hatch, the larvae feed for about two weeks until they form small cocoons. At the end of about 14 days, they emerge as fully formed adult bumblebees, ready to leave the nest, do the work of pollination and return to deposit pollen and nectar to feed the colony.

The colony starts with the queen laying eight to 14 eggs, which, after hatching into the larval stage, she tends by feeding for about 14 days until they pupate and form their cocoons.

A bumblebee colony maximizes in size at 200 to 500 individuals, here in Philadelphia typically in the second or third week of October. By this time, the colony has produced a new queen and males. The old queen (she only lives one year) has done her job of laying eggs. The new queen is a bit promiscuous and mates with several males. She stores their sperm and after mating, finds an empty hole in the ground and goes into a kind of hibernation called “diapause.” The entire colony dies except for the new queen bumblebee, who has a chemical in her blood that is a kind of antifreeze. The queen emerges in the spring and the entire cycle starts again with finding a new home, eating nectar and collecting pollen for her new brood and laying the first set of eggs. After the first set of bees matures, the queen remains in the nest, producing new eggs and tending to the larvae.

There are a few bumblebees that visit the pollinator garden that are particularly beautiful. The Northern Golden Bumblebee (Bombus fervidis) visits bluestar (Amsonia hubrechtii ) and blue false indigo (Baptisia australis) in May and then re-appears in August to feed on a lavender-colored common beebalm (Monarda fistulosa). The other bumblebee is the American bumblebee (Bombus pensylvanicus), which appears in late July and feeds on the common beebalm.

In September, there are several kinds of native asters, goldenrods and obedient plant (Physostegia virginica) for the bees to visit, along with some late perennial sunflowers.

If you want to help sustain our local bumblebees, and are lucky enough to have a sunny spot, consider planting a variety of native perennials that start blooming in the spring and go through the fall. Check this website to see if your garden is eligible to be a Penn State Certified Pollinator Garden: ento.psu.edu/pollinators/public-outreach/cert.