The Good News on Neem Oil, A Natural and Versatile Pesticide 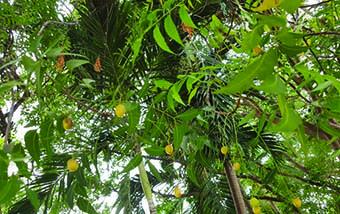 Neem products are derived from the seeds of the neem tree, Azadirachta indica, native to Africa and India. Neem is practically nontoxic to mammals and many beneficial insects, and it is biodegradable. It is used in India and other countries as an ingredient in toothpaste, soap, cosmetics, pharmaceuticals and cattle feed. It is interesting to note that the seeds themselves are poisonous if consumed without processing.

As a pesticide, neem is unique because it has so many uses. It acts as a broad-spectrum repellent, growth regulator and actual insect poison. It discourages feeding by making plants unpalatable to insects. It also inhibits their ability to molt and lay eggs. Neem’s chemical structure is so complex that scientists think it will take a long time for any insects to develop resistance to it.

Neem products can control a wide range of pests including aphids, gypsy moths, leaf miners, loopers, mealy bugs, thrips, whiteflies, Colorado potato beetles, corn earworms, cucumber beetles, flea beetles, Mexican bean beetles and mites. However, these products are not all the same, and they are made up of two distinct substances.

The seed kernels are soaked in water and alcohol to extract the natural neem oil. The resulting oil is treated again with alcohol, causing a substance known as Azadirachtin to separate from the neem oil. Azadirachtin has a very complex structure, and the seeds of the neem tree are its only source. The remaining oil, without the Azadirachtin, is called “clarified hydrophobic extract of neem oil.” This substance is commonly known as “neem oil” and is for sale in most garden centers.

So, now we have two active ingredients derived from the neem seeds: Azadirachtin and clarified hydrophobic extract of neem oil. They each affect pests in different ways. Both substances don’t last long when applied to plants, as sunlight quickly degrades them. Repeat applications are therefore required.

Azadirachtin interrupts metamorphosis, causing insects to die when making the transition to the next life stage or instar. It is effective only on immature stages of insects, and slower-acting than conventional insecticides. The insects must ingest it during feeding in order to be affected. It works better on insects that chew rather than suck, so it is effective against caterpillars. It is most effective at warmer temperatures (70º F and above).

Clarified hydrophobic extract of neem oil works by suffocating insects and mites such as aphids, leafhoppers, whiteflies, spider mites, mealy bugs and scale. This neem oil has contact activity only, so it is important to ensure thorough coverage of all plant parts and repeat per label recommendations.

Although these substances tend to not be directly harmful to some natural enemies, the effects on these “good bugs” vary according to the life stage exposed, the type of insect, the application rate and the actual product formulation. Although it is an organic product, it is toxic to bees exposed to direct treatment and should not be applied when bees are active in the area.

Neem oil also can be used to help control plant pathogens including powdery mildew, black spot on roses, anthracnose, downy mildew, rust and botrytis. It is most effective against plant disease when used on a seven-day repeat schedule.

For questions or comments: ron@primexgardencenter.com