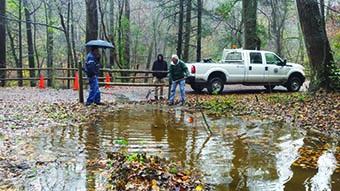 Climate change scientists have been predicting changes in weather patterns for the mid-Atlantic region for years, but even they are surprised by the rate and magnitude of change underway, a recent United Nations’ report revealed. It’s possible that 2018 could end up being the wettest year on record statewide, according to John Feerick, a senior meteorologist for AccuWeather.com. In our area, the National Weather Service recorded 67.4 total inches of rainfall in Philadelphia last year, 20.6 inches above normal, and 67.8 total inches for Montgomery County – 21 inches above normal.

Last year, saturated soil on steep slopes from frequent and significant rain events caused numerous slides and tree falls in Wissahickon Valley Park. Many segments of the upper trails and portions of Forbidden Drive have become increasingly eroded, causing widespread gullies and washouts. For instance, an onrush of stormwater flowing off Livezey Lane caused a mini landslide onto the Upper White Trailhead, while across the park, surface water runoff washed out the gravel access road from Pachella Field, landing in a heap on Forbidden Drive. Wind shear from a microburst toppled many large trees, including the Pennsylvania State Champion 76-foot cucumber magnolia, which stood next to the Cedars House Café. As of mid-November, FOW’s volunteer Sawyers Crew had removed more than 120 fallen trees from the upper trails.

The heavy rain has caused other problems as well: Many of FOW’s scheduled construction projects have been delayed, including the critically important restoration of the Wissahickon streambank collapse sites along Forbidden Drive.

For the majority of its length, Forbidden Drive is perched high on the banks of Wissahickon Creek, occupying a transition zone between the creek and the forested slopes above. The Drive was designed with a series of swales, inlets and culverts to handle stormwater. As long as it’s regularly maintained, this drainage system for the drive works well. But years of little or no maintenance have created hundreds of stormwater gullies along Forbidden Drive, three of which actually led to major collapses of the hillside/streambank in 2014, taking a portion of the Drive with them at three locations: downstream from Valley Green Inn, at the Mt. Airy Avenue Bridge and downstream from the Kitchens Lane Bridge.

FOW immediately installed temporary construction fencing for safety, then began seeking funds to repair the sites. Fortunately, we were awarded several grants from the Pennsylvania Department of Community and Economic Development and the Pennsylvania Department of Environmental Protection. While the design process got underway, engineers conducted a thorough inspection and analysis of the drainage system and conditions along the drive in the fall of 2016 and into the winter of 2017. The findings: There were 417 significant stormwater gullies along the drive, indicating a severe failure of the drainage system and an urgent need for correction.

Numerous factors dovetailed to create a significant challenge to repairing the three collapsed streambanks along Forbidden Drive: steep narrow slopes, stormwater flows in the creek, damaged habitat on the banks, site locations along the most heavily used trail in the park, trout stocking restrictions impacting the construction schedule, and the need for a design that will ultimately blend into the aesthetic beauty of the park. Design complications postponed the initial projected construction schedule from fall 2017 to the following fall. And this year’s record rainfall delayed contractor schedules throughout the region, pushing the start date even further back to June 2019.

Since the collapses occurred, FOW and our volunteers have conducted routine drainage maintenance along Forbidden Drive to help stem further development of stormwater gullies.

While this latest delay is discouraging, FOW will be focusing even more on prevention through a regimen of performing trail maintenance and clearing the Forbidden Drive drainage system, which includes adding corrective grading when necessary, keeping the swales and inlets clear of debris, clearing the drainage system and inspecting the culverts for repairs and/or replacement.

In response to all these challenges, FOW is increasing coordination with Philadelphia Parks and Recreation and the Philadelphia Water Department to improve response time when problems arise and add to resiliency of park infrastructure.

Hear the latest details about this and other upcoming projects for 2019, as well as progress on ongoing projects at FOW’s annual Public Projects Meeting on January 23 from 6-8 p.m. at the New Covenant Church of Philadelphia, 7500 Germantown Ave. Visit fow.org/events for more details and to register.