The Whys & Wherefores of CBD oil 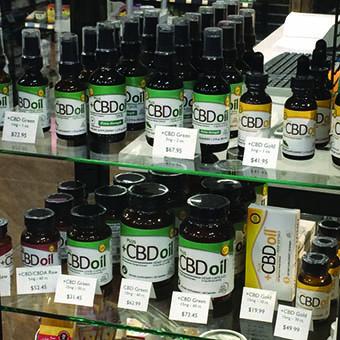 photo by Karen Plourde
Many (though not all) of the CBD options in our Ambler store.

Hang around any of our wellness departments long enough (FYI — it’s not easy; space is tight), and someone will ask a staff person for information on CBD. There are a whole lot of ailments out there, and shoppers want to know if CBD will make them feel better. The answer? Maybe, according to Weavers Way Next Door Manager Chris Mallam.

“We know that it helps with balancing our internal endocannabinoid system,” he said. “That’s where most of our customers see that benefit. We sell it as a balancing act.“

CBD’s scientific name is cannabidiol; it’s the nonpsychoactive compound extracted from hemp. The growing of hemp was outlawed in this country after Congress passed the Marijuana Tax Act of 1937, but that ban was lifted with the passage of the Farm Bill last year.

The endocannabinoid system is the network of receptors and transmitters that works in conjunction with our nervous and immune system. It regulates feeding, cognition, memory, and sleep and relaxation, along with our response to disease and stress. According to Chris, most of us have some kind of imbalance in these areas. “The cannabinoids work on these receptors to fill in those gaps,” he said.

Cannabinoids exist to some degree in black pepper, dark chocolate, hops, and such herbs as basil, cloves, cinnamon, rosemary, oregano and lavender, according to namastemd.com. But the concentration of them in the hemp plant is far higher.

Between 80 and 100 different cannabinoids, including CBD, can be extracted from the hemp plant. CBD manufacturers use different combinations of cannabinoids in their products, and also source their hemp from different places. CV Sciences, of Las Vegas and San Diego, imports European hemp, whereas Fountain of Health and Charlotte’s Web, both based in Colorado, use hemp grown in that state. Each of these brands can be found in our stores.

“Some brands work better for some people than other ones, because there’s a different spectrum of cannabinoids in each of the products besides the CBD,” Chris said.

The line that separates marijuana from hemp products is 0.3 percent of THC or tetrahydrocannabinol, the chemical responsible for most of marijuana’s psychological effects. All of the products carried at Weavers Way contain this concentration or less.

Among the various CBD delivery systems carried at our locations — gummies, tinctures, mist, capsules, softgels and balms — tinctures are considered the most effective, according to Chris. “We encourage the use of tinctures. They’re sublingually used, so it’s not really oral usage, but letting it sit under your tongue,” he said.

Tinctures are also popular among CBD users because they allow them to control their dosage. “One of the big questions is what the dosage is, and we really don’t know,” Chris said. “It’s very case by case…depending on what they’re using it for.”

Meredith Flaherty, a shift manager in the Chestnut Hill store who also works Next Door, said she’s found CBD helpful for treating her anxiety and migraines. Similarly, a regular Next Door customer has found it helps relieve his fibromyalgia symptoms, according to Chris. “We’re always interested in getting feedback from customers about their experiences,” he added.

Chris stressed that none of the CBD products carried by the Co-op are geared toward any specific condition. CBD has been credited with everything from relieving pain to lessening anxiety and depression to alleviating acne. It’s been approved by the Food and Drug Administration for the treatment of seizures associated with two epilepsy syndromes — Lennox-Gastaut syndrome and Dravet syndrome. But although the CBD learning curve has been steep the last few years, much is yet to be discovered.

“A lot of people ask ‘What should I expect?’ ‘What should happen?’ We don’t really know,” he said. “It all depends on your current brain [chemistry], as well as those receptors….we’re just breaking the ice, learning about these cannabinoids and how they’re working the body.”